A train of the Rhaetian Railway derailed into a ravine after hitting a landslide felt on the track on August 13th 2014. Eleven persons were injured, five of them seriously. One person died in the hospital ten days after the event. About two hundred persons were in the train.

Almost 180 rescuers with eight ambulances and four helicopters were involved in the rescue operations. The landslide occurred near the village of Tiefencastel between Chur and St-Moritz in the canton of Grisons. A 15 m long section of the railway track was buried with up to 3 m of material.

When the train hit the landslide, three passenger cars derailed. The first one, placed behind the locomotive, felt down about twenty meters into a ravine with a 45° slope. It was stopped during its fall by trees. The second passenger car stayed on equilibrium over the edge with the help of passengers who went to the back of the car to avoid its fall.

Weather conditions seem to have contributed to this event. It rained between 50 and 60 liter per square meter in 12 hours. This represents half of the usual monthly rain precipitations in the area. 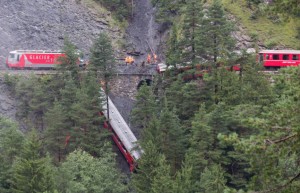 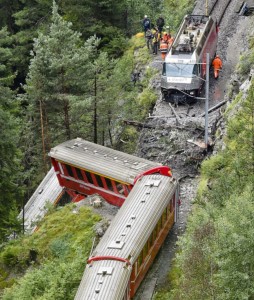 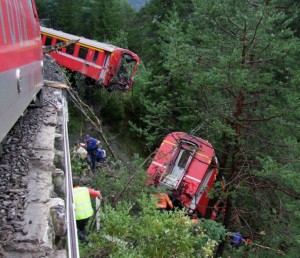 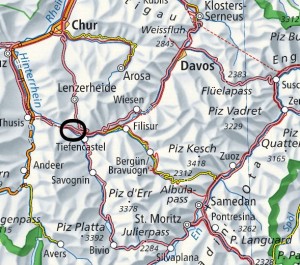