From 540 to 450 million years ago, the Earth underwent two of the most dramatic events in the history of life: the Cambrian Explosion and the Ordovician Radiation.  The bizarre-looking creatures of this time are interpreted as populating the early evolutionary lineages of nearly all modern-day animal phyla. The Cambrian Explosion established a phylum-level metazoan organization that has persisted unchanged for over 500 million years into the modern day, and the Ordovician Radiation filled in these phyla with an enormous amount of animal diversity. The overall organisation of the animal Kingdom was established by the end of the Ordovician Radiation. The only way to answer questions about these early pulses in animal evolution is to take a comprehensive look at the fossil record during the Cambrian and Ordovician, while also exploring the earlier fossil record of the Precambrian for context. 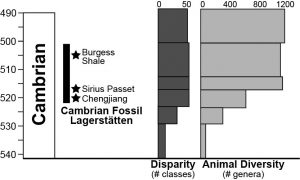 The ANOM lab examines evolution during the Cambrian Explosion using exceptionally preserved fossils, mainly of arthropods. Arthropods are the most diverse and abundant animal group alive today, and they equally dominated Cambrian and Ordovician ecosystems. The stem and crown group concept integrates early Paleozoic taxa into modern animal phylogeny, with the monophyletic crown group consisting of all extant members and descendants of a single common ancestor. Stem lineage members are extinct taxa that are closely related to a crown group but fall outside of it because they are missing defining morphological characteristics. When stem taxa are arranged in a lineage leading to modern crown groups, it allows us to reconstruct the evolution of major anatomical features in early fossils.

The Fezouata Biota is a recently discovered locality in Morocco that contains exceptionally preserved soft-bodied fossils as well as mineralized taxa. An early Ordovician age places it between the Cambrian Explosion and the Ordovician Radiation, making it ideally suited to provide crucial information on these major evolutionary events. A major research focus in the ANOM lab is describing the arthropod taxa of the Fezoata Biota, and placing them in phylogenetic and life history strategy contexts.