Pénélope Claisse conducted Masters research in the ANOM Lab from January to June 2021, while she was a graduate student at the University of Montpellier. She studies phylogeny and evolution applied to palaeontology. Her internship based at ANOM lab, focused on the phylogeny of Radiodonta. She described new hurdiid material from the Fezouata Shale and conducted phylogenetic analyses that aimed to include more whole-body characters in a new matrix. Pénélope is now doing a PhD on insect-plant interactions at the University of Lille in France.

James undertook a Masters project jointly supervised by Allison Daley at the ANOM Lab and Elias Samankassou at UNIGE, as part of the ELSTE Masters programme, from summer 2020 until summer 2021. He investigated an abnormality commonly found at the skeletal-tissue interface of scleractinian corals. Understanding the relationships attributed to this abnormality can have fundamental implications for interpreting geochemical proxy-based studies. He investigated the biological interactions and internal effects on coral skeleton geochemistry through experimental taphonomy, specifically comparing the areas of tissue that are in contact with the skeleton during decay, to areas not in contact. He also explored the relationship between temperature and skeletal geochemistry, demonstrating skeletal geochemical response to external temperature modifications. Currently, James is working on a PhD at the University of Geneva under the supervision of Prof. Tom Sheldrake & Dr. Elias Samankassou. 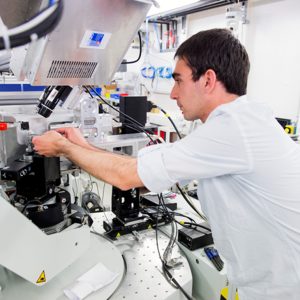 Pierre’s research focuses both on arthropod evolution and exceptional preservation throughout the use and development of advanced imaging techniques, particularly trace elemental mapping, which allow visualizing new anatomical characters and/or deciphering the chemical and structural changes that may affect an organism during and after burial. After working for 18 months as an SNSF postdoctoral researcher in the ANOM Lab, Pierre obtained his own research funding through the SNSF Spark funding program for another year at UNIL, during which time he developed our multispectral macroimaging system and studied the anatomy and evolution of Fezouata Shale arthropods. In 2021, he took up a research post at the European research platform IPANEMA dedicated to ancient materials (Gif-sur-Yvette, France), where he also did previous postdoctoral research. Pierre completed his PhD at the Muséum national d’Histoire naturelle (Paris). 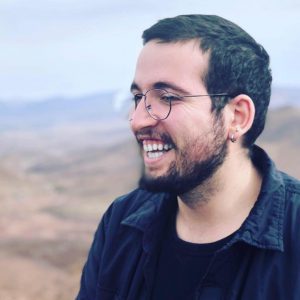 Farid obtained his PhD from the Laboratoire de Géologie de Lyon – Terre, Planetes, Environment in Lyon, France in 2020, after being affiliated with the ANOM Lab for several years. Farid works on the taphonomy of soft tissues. The aim of his research is to constrain how different parameters and processes (e.g. storms, early and late diagenesis, alteration, etc.) influenced exceptional preservation at localities such as the Fezouata Shale (Lower Ordovician, Morocco), Burgess Shale (Middle Cambrian, Canada) and Chengjiang Biota (Lower Cambrian, China) based on an understanding of the sediment mineralogy and chemical, elemental and isotopic heterogeneities in these deposits. Farid is currently a postdoctoral fellow at Yunnan University. He is also the Diversity Office for the Palaeontological Association. 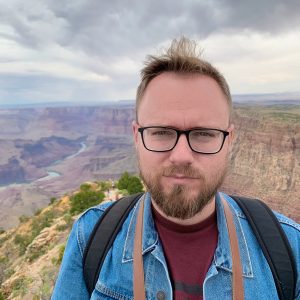 Lukáš’s research is focussed on evolution and development of various Paleozoic arthropods, especially trilobites. In particular, inferring their ancestral larval and juvenile body plans, evolutionary modification of their development, their palaeobiogeography and their responses to major events during Cambrian and Ordovician. He is also interested in functional morphology, biology and phylogeny of arthropods in general. He did his PhD at the Charles University, Prague and worked as a postdoc in the ANOM Lab at the University of Lausanne for three years. He was then awarded  funding from the Czech Science Foundation for his three-year research project exploring developmental aspects in fossil arthropods during Cambrian explosion and Ordovician biodiversification. He began this research project at the Czech Academy of Science in Prague in 2020. 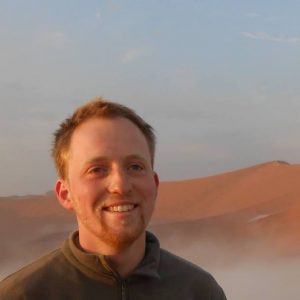 Steve’s research focusses on predation during the Cambrian period – around 500 million years ago. He investigates the largest predators of the time, the Radiodonta, to understand their feeding methods and geographical and temporal distribution, and examines prey animals, the trilobites, for signs of repaired injuries and anti predatory adaptations. This helps us to understand the importance of predation as an evolutionary driver in the immediate aftermath of the Cambrian Explosion and appearance of modern animal phyla. Steve is also interested in exploring the interaction between form and function more broadly in arthropods by applying statistical and engineering methodologies to quantify the morphology and hydrodynamics of extant and extinct animals, evaluate possible examples of evolutionary convergence, and better understand how environmental controls may have shaped the evolution of animals in deep time. In 2015 Steve began his PhD with Allison Daley as the main supervisor at Oxford University (UK) in the Department of Zoology, and completed it in 2019 after spending a year at the University of Lausanne (Switzerland). He then obtained an Alexander Agassiz Postdoctoral Fellowship in the lab of Javier Ortega-Hernández at the Museum of Comparative Zoology at Harvard University (USA). Steve’s current post is as Herchel Smith Postdoctoral Fellow in the Department of Zoology at  University of Cambridge (UK). 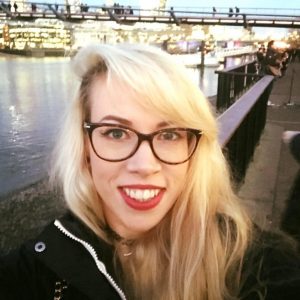 Harriet investigates the evolution of exoskeleton moulting in Arthropoda, with an emphasis on trilobites due to their extensive fossil record. Moulting of the exoskeleton is key to arthropod life-history, as it protects them from predation but prevents growth, and so must be repeatedly shed to develop and repair the body. These shed moults are preserved in great number as fossils. She uses broad-scale analyses and case studies from exceptionally-preserved areas (Konservat-Lagerstätten) to investigate the variability and impacts of exoskeleton moulting behaviour on arthropod evolution. This requires looking at many aspects of the arthropod fossil record, including morphology, phylogeny, behaviour, ecology, and development. Harrie began her PhD with Allison Daley as the main supervisor at Oxford University (UK) in the Department of Zoology, and completed it in 2019 after spending a year at the University of Lausanne (Switzerland). She currently works as Commissioning Editor in Secondary STEM Education at Oxford University Press.