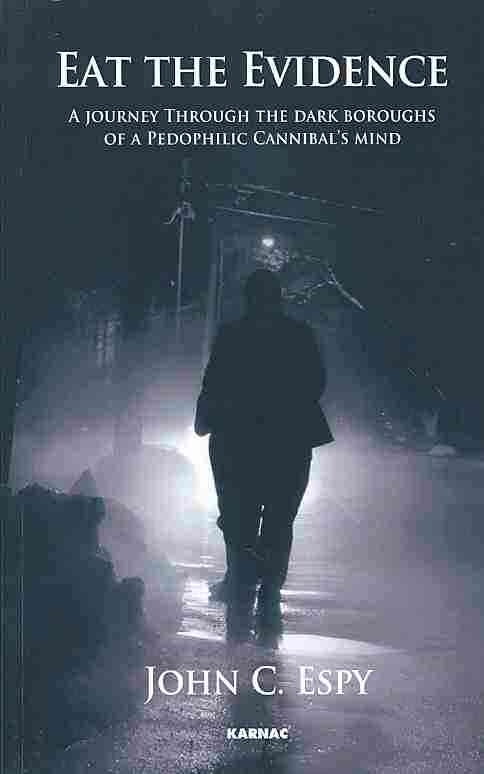 Image: John C. Espy’s Eat the Evidence: A Journey Through the Boroughs of a Pedophilic Cannibal’s Mind Book Cover. Source. All rights reserved.

Raw. Revolting. Unrestrained. These are the three words that pop into my mind after reading John C. Espy’s Eat the Evidence: A Journey Through the Boroughs of a Pedophilic Cannibal’s Mind, the first book in a series by Karnac Press. Based on hundreds of hours of interviews, Espy delivers the biography of the child predator Nathaniel Bar Jonah in a journalistic style. Although the protagonist was born David Paul Brown in 1957, Espy always refers to him as Bar Jonah (a self given name with a religious background) in order to shape his monstrous character. The reader follows the protagonist from his birth up to the murder of 10-year-old Zachary Ramsay in 1996 in Great Falls, Montana. We discover a constantly lying character, who gets the confidence of many parents in order to get access to their children. The more we read, the more we get frustrated by the naivety and ignorance of Bar Jonah’s surroundings. Wouldn’t a woman find it weird, if her lover didn’t want to share the same bedroom in order to preserve his virginity until marriage, but welcomed little boys to sleep in his bed with him? We get disgusted when Bar Jonah offers his special chili con carne (made out of human flesh) to his neighbors. We get revolted by his release when Christian psychologists evaluate him and understand that his deeds were “in the service of the Lord.” And we even get challenged to question if pedophilia is not only another sexual orientation that is fortunately seen as immoral when another pedophile, Doc Bauman, questions Bar Jonah’s murderous attitude.

Through very short, but detailed, descriptions of the character and his atrocious killings, Espy culminates in twisting the reader’s stomach. You feel suffocated by Bar Jonah’s hunger. The sharp and direct words sting your olfactory senses once you realize that the description of Bar Jonah’s horrid scent is invading your nose. This however won’t let you put the book aside. After a deep breath of fresh air you pick it up again because of the thrilling, fast-developing plot that turns you into an investigator of the Ramsey case.

It might be disappointing that the plot is told in a third-person narrative, however this might also be the strength of this book. Espy’s aim wasn’t to pity Bar Jonah’s condition, but to show how this psychopathic mind works. He wanted to “take the reader inside the inner world of a serial pedophile but also to allow the reader to experience someone as pathologically primitive from within.” Before plunging into the narrative, Espy takes time to educate the reader on the condition of a pedophile which instantly shapes the monstrous character of Bar Jonah: “It is imperative for the reader to understand that pedophiles live for only one purpose and that is to manifest their pedophilia. Everything that the pedophile does is to find a way to express this profoundly primitive psychological state of being. Inherent in the world of the pedophile is the aspect of lying, deception, and manipulation; they are the life’s blood of his inner and interpersonal world and are manifest through a primitive psychological mechanism called projective identification.”

Although the editor missed some spelling mistakes, this book might not be the best read for some people due to its harsh treatment of such disturbing topics. As a big fan of torture porn movies like Hostel (Eli Roth, 2005) and the Saw franchise (2003-2010), I had an uncomfortable, yet insightful, reading experience. The book really does “take the serial perpetrator into the psycho of the reader” as does the synopsis state. Espy really punches you in the guts with his raw vocabulary and sometimes cynic tone and leaves you craving for the second part A Parasite in the Mind (published in September 2014). A must read for all those who want to get instructed and who are interested in the dark boroughs of a troubled human mind.

One Reply to “John C. Espy’s Eat the Evidence: A Journey Through the Boroughs of a Pedophilic Cannibal’s Mind”