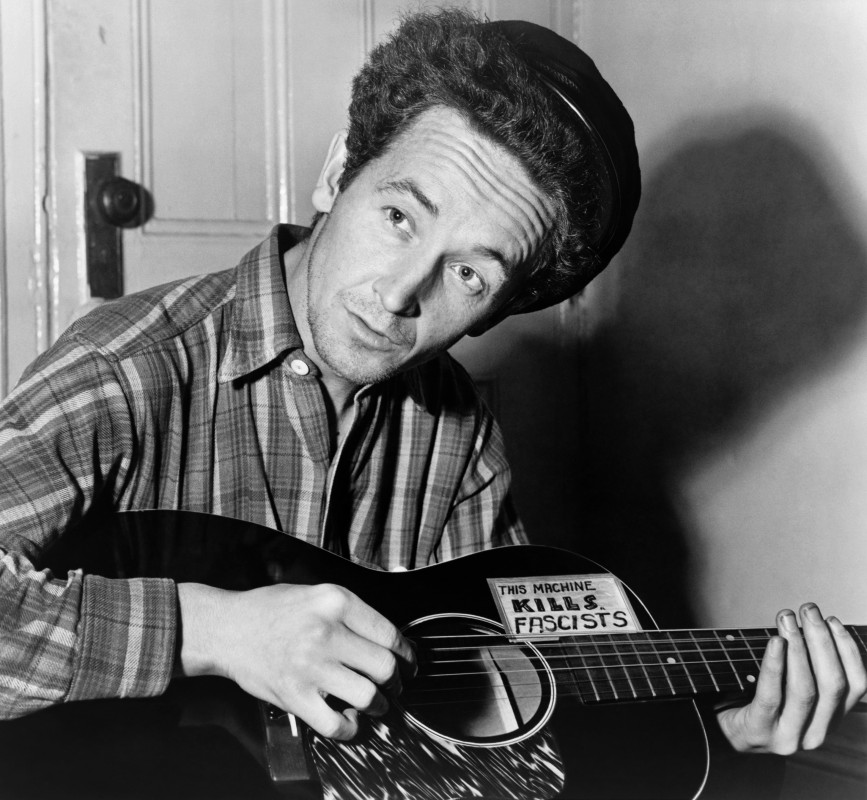 Will Kaufmann’s lecture on Woody Guthrie illustrates how strongly connected music, poetry and history can be. By giving historical background information to some of Guthrie’s songs, he helps to contextualize and understand the songs better. As Kaufman illustrated in his lecture, Woody Guthrie, as he grew up and was educated by life experience turned from a poor white Oklahoma Dustbowl country boy and raised racist to an important and fervent civil rights activist. In his songs we can trace the development for his concern for social justice and civil rights. Kaufmann’s lecture was very accessible and vividly illustrated by images and underlined by Guthrie songs. Where as you could read about Guthrie’s radical political activism Kaufmann’s presentation makes Guthrie come alive much more than on the pages of a book or some website. Kaufmann seems to have internalized the stories of Guthrie’s life like any good storyteller. He cites Guthrie and others by heart, speaks with enthusiasm and like any good storyteller he acts out his stories while telling them and singing the songs. It becomes clear to what extent Woody Guthrie’s ballads are stories put to music. And how his songwriting is somehow a kind of oral history. In his songs he is telling historical events from the perspective of the people involved, often the victims themselves. He gives them a voice, although a fictional one, and lets them speak out in his songs. For example in a song about the Sacco and Vanzetti case, called “Vanzetti’s Letter”, the two convicts address Governor Fuller:

We, Bartolomeo Vanzetti and Nicola Sacco, do say:
Confined in your jail here at Dedham and under the sentence of death,
We pray you exercise your powers to look at the facts of our case;
We do not ask you for a pardon, for a pardon would admit of our guilt;
Since we are both innocent workers, we have no guilt to admit.

Guthrie lets the victims in a case of miscarriage of justice speak out, thereby pulling in his listeners to identify and feel complicit with them. If one is not indifferent to Guthrie’s music and lets oneself be touched by it, it is almost impossible not to feel appalled by the extent of injustice of many of the stories he tells. The song “Don’t kill my baby and my son” about the Okemah lynching of Laura Nelson and her son, where Guthrie’s father was possibly involved, gives the same shivers down the spine as the poetic I sings about, when he hears the “deathly call” of a desperate mother willing to give her live in order to protect her children, especially when you know the background story and when you have seen the postcard of the lynching that Guthrie also sings about.

Will Kaufmann on Woody Guthrie:

Guthrie Songtext „Don’t kill my baby and my son“