The area named “Steelhead Haven” was engulfed by a major landslide on March 22, 2014, in Oso, Washington, United States (SeattleTimes). 41 fatalities (Snohomish County Sheriff’s Office)  and 2 missed persons were identified (Snohomish County Sheriff’s Office). Mud masses collapsed from an unstable hill and covered an area of about 2.5 km2 , destroying 49 houses and other structures (SeattleTimes). Suspected cause is soil saturation because of heavy rainfall (WashingtonPost).

For more information about the geology of the landslide, please see the article in the ScienceMag and from the USGS site. To have a look at the landslide area, see the ArcGis 3D model and the “before versus after” graphic. 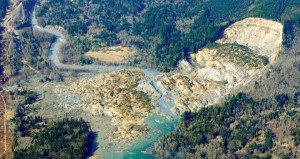