The Earth is in constant movement. Interactions between tectonics, erosion, and climate are shaping our landscapes and are key factors to the formation of orogens. In this, plate-tectonicsplays an important role in the building of mountain ranges. 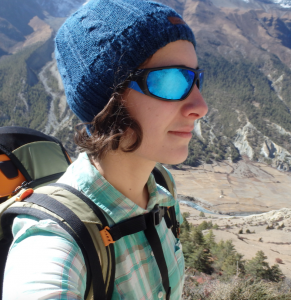 In my research, I want to constrain the tectonic evolution of faults in an orogen situated in an active convergence zone. For this, I employ a multidisciplinary approach combining fieldwork, analysis in the laboratory and numerical modelling. First, I develop the thermochronometry luminescence method to have a better understanding of how exhumation is recorded through time, and what influences the luminescence signal. I then use luminescence thermochronometry to resolve exhumation over sub-Quaternary timescales, and I include the results in a numerical model to differentiate the role played by erosion, tectonics and climate during the Quaternary at the scale of mountain ranges. The ultimate aim is to gain a better understanding of tectonics, earth surface processes and landscape evolution, focussing on mountainous regions.

My PhD project focusses on the tectonic evolution of faults in the Nepalese Himalayas. The Himalayas are situated at the boundary between the Indian and the Eurasian tectonic plates. The faults associated with this convergent zone are still active and play an important role in the related seismic hazard.

In this project, I am investigating whether luminescence thermochronometry can be used to determine and constrain the sub-Quaternary deformation rates in the Himalaya, through measuring different transects of samples from the Siwaliks and the High Himalaya in Nepal.

Luminescence thermochronometry is a recently developed technique that offers the potential to resolve exhumation over sub-Quaternary timescales by constraining the thermal histories of rocks. I compare exhumation histories on each side of the major thrusts shaping the Nepalese Himalayas, and relate these changes to tectonic movements, in order to decipher the interplay between tectonics, erosion and climate.

Fascinated by mountainous environments and by nature, I decided to combine science and my desire to explore the world by studying geology.

At the end of 2016, I obtained a Master of Science in Geology from the Ecole Nationale Superieure in Environment, Georesources and Sustainable Development – INstitute Polytechnic of Bordeaux (ENSEGID – Bordeaux INP), France. Throughout my studies I developed my knowledge in geology, field geology, and sedimentology, and in particular took part in different field campaigns in Spain, Morocco, and Oman. During my Master project and the following internship, I worked on the Ordovician to Silurian pre-, syn- and post-glacial series of Morocco. I was introduced to glaciology through an internship at the World Glacial Monitoring Service, University of Zurich.

I continued to develop my passion for geology by doing a ‘Diplôme Universitaire’ in geosciences with the ENSEGID. I first deepened my research on the Ordovician of the Moroccan Anti-Atlas, and I then started to work in the Western Pyrenees on the sedimentological response of a hyper-thinned rift reworked into an orogen (Cretaceous deposits, Bidarray Basin).

In mid-October 2017, I started my PhD on the Himalayas at the Institute of Geological Sciences, and at the Oeschger Centre for Climate Change Research, University of Bern. In 2019 I transferred to the Institute of Earth Surface Dynamics, University of Lausanne to continue my PhD-work on the evolution of Nepalese-Himalayan tectonics.