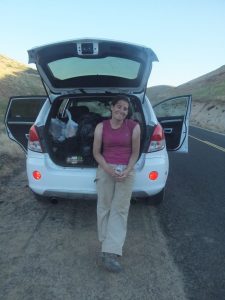 The last 2 million years of Earth’s history has been characterised by abrupt climatic shifts between warm interglacial and cold glacial conditions which profoundly impacted the Earth’s surface. I am principally interested in understanding how and when environmental change occurred, which I achieve through the development and application of novel trapped-charge dating methods i.e. Luminescence and Electron Spin Resonance dating. I am currently working on projects in the Himalaya, the Atacama desert, the Japanese and European Alps.

I obtained a BA (Hons) in Geography from the University of Oxford in 2004 followed by an MSc in Quaternary Science at Royal Holloway/University College London which I completed in 2007. I then moved to the University of St Andrews in Scotland to pursue a PhD in Earth Sciences supervised by Ruth Robinson and Adrian Finch which I completed in 2011. My PhD research concerned understanding the fundamental and sedimentological controls on the luminescence of quartz and feldspar minerals with a field site of Jostedalen in Norway. In 2012 I was appointed as a post-doctoral Research Fellow in the Aberystwyth Luminescence Research Laboratory, Wales, collaborating with Helen Roberts, Geoff Duller and Nicholas Pearce. In 2013 I was appointed as a Senior Scientist in the Institute of Earth Surface Dynamics where I helped Frédéric Herman to establish the luminescence dating facility and primarily worked on the establishment of luminescence thermochronometry. In 2015 I moved to the University of Cologne, Germany to head the Cologne Luminescence Laboratory and was offered tenure in 2016. In 2016 I secured an Ambizione fellowship and returned to Switzerland to the University of Bern, before returning to the Institute of Earth Surface Dynamics to establish a research group in mid-2018.

Biswas, R.H., Herman, F., King, G.E. and Braun, J., 2018. Thermoluminescence of feldspar as a multi-thermochronometer to constrain the temporal variation of rock exhumation in the recent past. Earth and Planetary Science Letters, 495, 56-68.