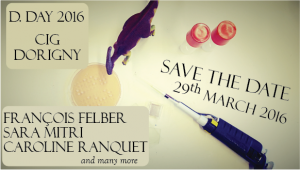 “Interdisciplinary science and the evolution of social interactions in robots and
bacteria” Dr. Sara Mitri

Science is driven by curiosity. The approaches to satisfying this curiosity and answering scientific questions are very diverse. In this talk, I will give an overview of my research on understanding how cooperative and competitive social traits evolve in individuals and shape the communities they live in. This work has combined many approaches: the use of robots to study the evolution of cooperation and communication, the use of colonies of bacteria with a mixture of different lineages to study the organization of cells in space, and the use of mathematics and laboratory experiments to disentangle and model growth dynamics in a multi-species bacterial community. Through these studies I will discuss my current understanding of the evolution of cooperation and conflict, as well as the choice of methods and approaches in the biological sciences.

“Evolution of wild wheats and their interactions with cultivated wheatr” Dr. François Felber

Cultivated wheat result of a long evolution including hybridisation and whole genome duplication. Gene exchanges may occur between wheat and wild relatives which, in the case of outdoor cultivation of genetically modified wheat, could lead to transgene escape to the environment. Risk assessment of cultivation of transgenic wheat in Switzerland was carried out with two approaches. On one hand, the analysis of natural populations of wild wheats close and far from cultivated one assessed the intensity of long term introgression of wheat genes. On the other hand, greenhouse and field experiments evaluated risk of short term transgene escape from cultivated wheat to wild relatives, and their possible ecological consequences. Presently, our research focuses on the comparative evolution of genomes and transposable elements (TEs) in space and time of wild wheats, as well as the possible role of TEs in the maintenance of species barriers.

Technological developments over the last two decades have afforded novel insights at the regional, cellular, and molecular levels into neuroenergetics. At one end of the resolution spectrum, functional brain imaging techniques have shed new light on the regulation of regional brain energy metabolism in register with neuronal activity. At the other end of the resolution spectrum, studies on homogeneous preparations of the cellular elements of the brain, in particular neurons and astrocytes, such as primary cultures or fluorescence- activated cell sorting (FACS)-purified cells and single- cell analyses by transcriptomics or using nanosensors/fluorescent analogs or specific metabolites, have provided means to disentangle the relative contributions of each cell type to the metabolic processes analyzed by PET, fMRI, and MRS. A current challenge for neuroenergetics is to integrate the various levels of resolution scales at which data are gathered to provide a coherent view of brain energy metabolism across resolution scales (for a review see Magistretti and Allaman, Neuron, 2015).
A tight metabolic coupling between astrocytes and neurons is a key feature of brain energy metabolism (Magistretti and Allaman, Neuron, 2015). Over the years we have described two basic mechanisms of neurometabolic coupling. First the glycogenolytic effect of VIP – restricted to cortical columns – and of noradrenaline – spanning across functionally distinct cortical areas – indicating a regulation of brain homeostasis by neurotransmitters acting on astrocytes, as glycogen is exclusively localized in these cells (Magistretti, J. Exp. Biol., 2006). Second, the glutamate-stimulated aerobic glycolysis in astrocytes. This metabolic response is mediated by the sodium-coupled reuptake of glutamate by astrocytes and the ensuing activation of the Na-K-ATPase. This results in the release of lactate from astrocytes, which can then fuel the neuronal energy demands a mechanisms known as the ANLS (Pellerin and Magistretti, J Cereb Blood Flow Metab, 2011). Evidence has been accumulated that, under aerobic conditions, lactate may be the preferential energy substrate of activated neurons (Magistretti and Allaman, Neuron, 2015). Indeed, in the presence of oxygen, lactate is converted to pyruvate, which can be processed through the tricarboxylic acid cycle and the associated oxidative phosphorylation, to yield 17 ATP molecules per lactate molecule. The ANLS data suggest that during activation the brain may transiently resort to aerobic glycolysis occurring in astrocytes, followed by the oxidation of lactate by neurons. Furthermore, the ANLS model provides a direct mechanism to couple synaptic activity with glucose use and is consistent with the notion that the signals detected during physiological activation with 18F-deoxyglucose (DG)-PET may reflect predominantly uptake of the tracer into astrocytes. This conclusion does not question the validity of the 2-DG-based techniques, rather it provides a cellular and molecular basis for these functional brain-imaging techniques.
We have recently revealed a second function of lactate, as a signaling molecule for plasticity. Indeed we have shown that lactate derived from astrocytic glycogen is necessary for long-term memory consolidation and for induction in neurons of plasticity genes such as Arc and for maintenance of LTP (Suzuki et al, Cell, 2011). We therefore set out to investigate the molecular mechanisms at the basis of the function of L-lactate on neuronal plasticity. We have found that L-lactate stimulates the expression of synaptic plasticity-related genes such as Arc, Zif268 and BDNF through a mechanism involving NMDA receptor activity and its downstream signaling cascade Erk1/2 (Yang et al, PNAS, 2014). L-lactate potentiates NMDA receptor-mediated currents and the ensuing increases in intracellular calcium. In parallel to this, L-lactate increases intracellular levels of NADH hence modulating the redox state of 8 neurons. NADH mimicks all the effects of L-lactate on NMDA signaling, pointing to NADH increase as a primary mediator of L-lactate effects. Effects on plasticity gene expression are observed both in primary neurons in culture and in vivo in the sensory-motor cortex. These results provide novel insights for the understanding of the molecular mechanisms underlying the critical role of astrocyte-derived L-lactate in long term memory and reveal a novel action of L-lactate as a signaling molecule for neuronal plasticity.

Recently we have described a role of lactate in another form of plasticity, which relates to cocaine-induced conditioned place preference (Boury-Jamot et al, Mol Psy, 2015). Indeed a central problem in the treatment of drug addiction is the high risk of relapse often precipitated by drug-associated cues. The transfer of glycogen-derived lactate from astrocytes to neurons is required for long-term memory. By infusing the inhibitor of glycogen phosphorylase DAB, into the basolateral amygdala of rats, we observed that disruption of astrocyte-derived lactate not only transiently impaired the acquisition of a cocaine-induced conditioned place preference but also persistently disrupted an established conditioning.
The drug memory was rescued by L-Lactate co-administration through a mechanism requiring the synaptic plasticity-related transcription factor Zif268 and extracellular signal- regulated kinase (ERK) signalling pathway but not the brain-derived neurotrophic factor (Bdnf). The long-term amnesia induced by glycogenolysis inhibition and the concomitant decreased expression of phospho-ERK were both restored with L-Lactate co-administration.

These findings reveal a critical role for astrocyte-derived lactate in positive memory formation and highlight a novel amygdala-dependent reconsolidation process, whose disruption may offer a novel therapeutic target to reduce the long-lasting conditioned responses to cocaine.

BGene genetics is a spin-off of the Grenoble-Alpes University (France). The start-up was created in February 2014 by Dr Caroline Ranquet, a researcher with a 15 years experience in academic research, and Dr Marie-Gabrielle Jouan, who was working at the office of technology transfer of the university. Caroline Ranquet is specialized in molecular biology, bacterial genetic and microbiology.
With their remarkable metabolic and functional diversity, microorganisms (and more especially bacteria) are the most promising tools for synthetic biology, in other words the « design of organisms that are endowed with new features ». It is possible to harness their properties for industrial use, such as the production of biofuel, new therapeutic molecules or aroma…
BGene is uniquely positioned to provide innovative services around the design, construction, and optimization of tailor-made bacterial strains. Through a combination of proprietary tools and a strong expertise in genomic engineering and synthetic biology, BGene is able to modify and improve the microbial genome efficiently, leaving no scar or antibiotic resistance gene. The strengh of BGene also lies in the partnerships with bioinformatics companies, which are essential in efficiently producing metabolic pathways of interest.

Singer Instruments, headquartered in England, develop robotics to accelerate cancer research, drug discovery and biofuels development in laboratories around the globe. With satellite offices in California and Singapore, and representation in five continents, Singer Instruments collaborate with prestigious clients like NASA, Carlsberg, BP and the top 20 universities in the World. This is a candid talk about some of the challenges associated with growing a small business: What motivates us; Creating a passionate work culture; Why we have lots of BBQs; Why we play poker at work!