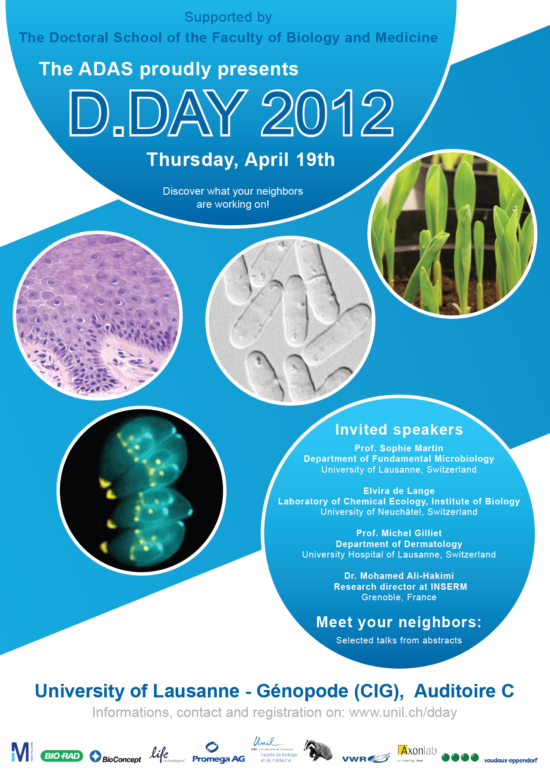 08:30 Registration and Posters pin up

“Hidden struggles for survival: Plant-insect interaction above- and below-ground”

“Toxoplasma parasites and subversion of the host cell microRNA pathway”

Cell polarization is crucial for cell function both during development and in differentiated cells. We use the fission yeast Schizosaccharomyces pombe to uncover basic concepts in cell polarization, because it is a simple, yet relevant model system that affords powerful genetic, biochemical and live-cell imaging tools. Fission yeast cells proliferate by mitotic divisions, growing by polar extension and dividing by medial fission. I will present how the cell polarizes growth at its poles and monitors its length to ensure division occurs only once it has reached a sufficient size. Briefly, this relies on a geometry-sensing mechanism, where a signal – the protein kinase Pom1 – forms concentration gradients from the ends of the cells, which inhibits a sensor – the protein kinase Cdr2, itself an activator of mitotic entry – placed at the cell equator. Since Pom1 concentration at the cell middle is higher in short cells than in long cells, this suggests a model where Pom1 inhibits Cdr2 until the cell has reached a sufficient length. Fission yeast cells also reproduce sexually. To choose their mating partner, yeast cells secrete pheromones and respond by polarizing growth towards the pheromone source, for which the small GTPase Cdc42 is essential. I will describe a novel polarization strategy where a dynamic Cdc42 zone explores the cell periphery to orient growth for partner selection.

Insects account for at least 15% of the world’s crop losses, and although current pest control measures are quite effective, novel methods are needed for more sustainable ways to handle insect pests. Recent focus has been the strategies that plants themselves use to combat their enemies. Our group mainly works on chemical defense traits in maize.
Most studies on plant defenses focus on leaves, as they are relatively easy to study. Aboveground, a true struggle for survival is going on. In response to caterpillar feeding, maize shoots produce toxins like benzoxazinoids. In addition, the shoots emit herbivore-induced volatile organic compounds (VOCs). Parasitoid wasps use these VOCs to locate insect herbivores as hosts for their offspring. In a field study in Mexico, we assessed the importance of attracting parasitoid wasps for the survival of plants when under attack by larvae of the moth Spodoptera frugiperda, one of the main maize pests in the Americas.
Our group also studies such interactions belowground, where a similar struggle for survival takes place. In response to an attack by the root-feeding larvae of the beetle Diabrotica virgifera, maize roots emit VOCs that attract insect-killing nematodes. Interestingly, American maize varieties have lost the ability to release a key nematode attractant, making their roots much more vulnerable to Diabrotica damage. By transforming a deficient maize line with a gene from oregano, we succeeded in restoring the signal and enhancing the protection that nematodes provide to the roots. We are also in the process of developing capsules that contain nematodes to facilitate their application to the soil. The aim is to develop a biological control strategy with nematodes to combat Diabrotica, a pest that causes more than two billion dollars worth of damages every year.

Toxoplasma gondii is the most widespread apicomplexan parasite, present virtually everywhere on earth. Although usually causing only mild symptoms in the adult, it can cause severe and life-threatening diseases in developing fetuses and in immune-compromised individuals, especially AIDS and transplant patients. Although the alterations of the host cell harboring Toxoplasma parasites have been extensively documented at the cellular level, still little is known about how the parasite manipulates the host cell at the molecular level. So far, most of the molecular work on the host-parasite interface has focused on the role of parasite factors that are secreted by the invading parasite into the host cell. Given the propensity of Toxoplasma to co-opt cellular pathways and activities for their benefit, it is perhaps not surprising that these parasites could also reshape their cellular environment by reprogramming the host’s RNA-interference (RNAi) machinery. RNA silencing plays a major role in innate antiviral and antibacterial defenses in plants, insects, and animals through the action of microRNAs (miRNAs). miRNAs can act in favor of the microorganism, either when it is pathogen-encoded or when the microorganism subverts host miRNAs to its benefit. Recent data point to the possibility that apicomplexan parasites have developed tactics to interfere with host miRNA populations in a parasite-specific manner, thereby identifying the RNA silencing pathway as a new means to reshape their cellular environment. Our recent data highlights the current understanding and new insights concerning the mechanisms that could be involved and the potential roles of the host microRNome in Toxoplasma infection.