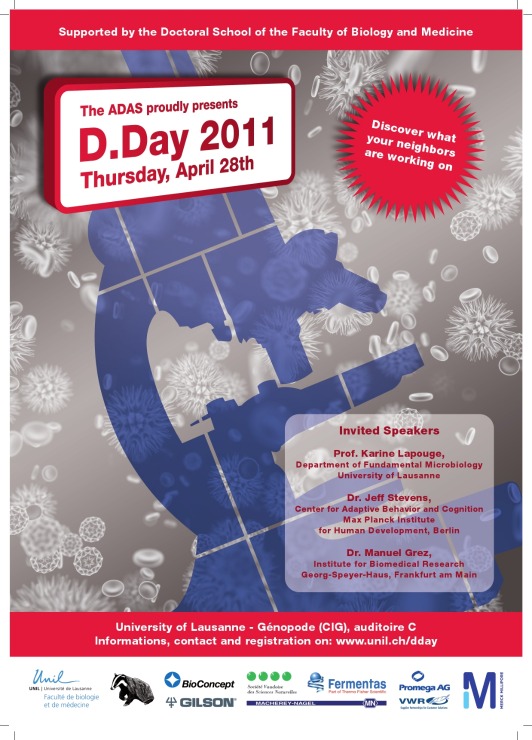 “Endoglycan, a member of the CD34 family of sialomucins, is a E-selectin ligand
expressed in membrane rafts of leukemia cells and a signaling molecule” – Gaelle Billoud

“What’s there for lunch today : How does Pseudomonas aeruginosa PAO1 adapt to the menu?”, Karine Lapouge

Bacteria are indispensable components of our ecosystem. They have developed an extraordinary capacity to adapt to environmental changes by modulating cellular functions at the transcriptional and post-transcriptional levels. It has long been known that transcriptional regulation is crucial for this adaptation. However, translational regulation has recently been shown to be equally important, as it is rapid and effective at low energy cost. For transcriptional regulation depending on external signals, bacteria have developed sophisticated two-component regulatory systems. These systems sense and respond to environmental changes, such as nutrient availability, oxygen tension, osmolarity or cell population density. For post-transcriptional regulation mRNA stability and initiation of translation can be regulated mainly by small non-coding RNAs (sRNAs).
Our organism of interest is Pseudomonas aeruginosa PAO1, a versatile ubiquitous bacterium and opportunistic pathogen, which has a phenomenal capacity to adapt to different environments and utilizes a wide variety of organic molecules as carbon, nitrogen and energy sources. This is not surprising as its genome contains an unusually large number of genes for catabolism, nutrient transport and metabolic regulation. However, the regulatory systems involved in Pseudomonas aeruginosa PAO1 adaptation to environmental changes are not well known and we intend to investigate these mechanisms.

Therefore, the overall aim of our research is to study the mechanisms of transcriptional control by two-component systems and of translational control by novel sRNAs in nutrient uptake and catabolism in Pseudomonas aeruginosa PAO1.

Animals often aid others without gaining any immediate benefits. Although these acts seem to reduce the donor’s fitness, they are only apparently altruistic. Donors typically help because they or their kin receive future benefits or avoid costly punishment. Reciprocity – alternating the roles of donor and recipient – has been a well-studied form of cooperation among non-kin because of its intuitive appeal in explaining human cooperation. Models of reciprocity, however, have not considered the psychological mechanisms needed to implement the proposed decision strategies. A bounded rationality approach emphasizes the need to build realistic assumptions about cognition into models of cooperation.

Chronic granulomatous disease (CGD) is a rare inherited immunodeficiency characterized by recurrent, often life threatening bacterial and fungal infections due to a functional defect in the microbial-killing activity of phagocytic neutrophils. In our gene therapy trial for X-CGD patients we demonstrated reconstitution of oxidative burst capacity and elimination of preexisting severe infections. However, an unexpected expansion of gene marked myeloid progenitors occurred five months after transplantation, which was triggered by insertional activation of MDS1/EVI1, PRDM16 or SETBP1.
We monitored patients for clinical health, hematological reconstitution, phagocyte function, gene marking, clonal fluctuation, cytogenetic and DNA methylation status. After the initial resolution of bacterial and fungal infections, both patients developed a myelodysplastic syndrome (MDS) caused by insertional activation of MDS1/EVI1 followed by clonal progression and the loss of chromosome 7. Also the level of superoxide production by gene corrected cells decreased constantly with time. Quantitative RT-PCR analysis over time revealed a transcriptional down regulation of gp91phox expression due to CpG methylation at the viral LTR promoter. P1 died 27 months after gene therapy of MDS in combination with severe septicemia, the latter resulting from loss of bacterial killing activity in transduced cells. P2 underwent allogeneic stem cell transplantation. Forced overexpression of MDS1/EVI1 or EVI1 in human cells disrupted normal centrosome duplication, linking MDS1/EVI1 activation to the development of genomic instability.
Gene therapy for X-CGD can provide considerable clinical benefits. Advances in vector design that avoid proto-oncogene activation and promoter methylation will enable the safe and effective application of this strategy for the long-term correction of X-CGD.