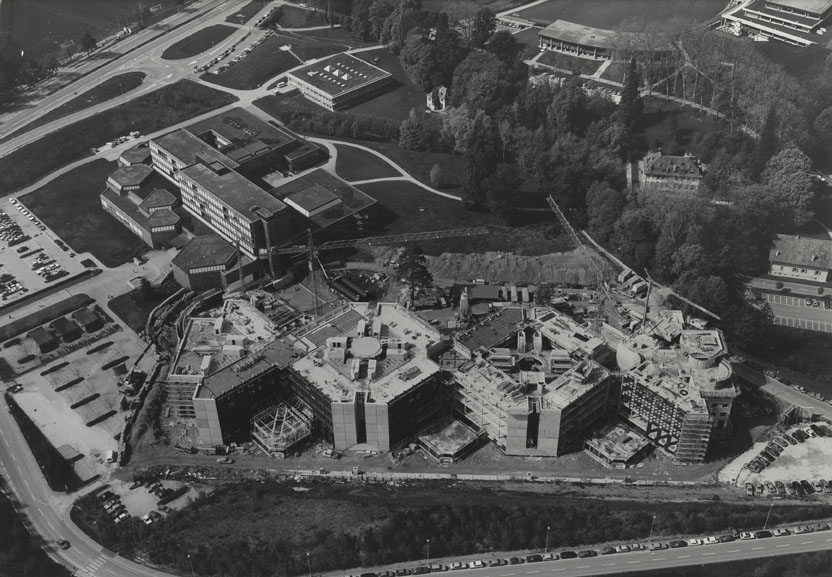 In an effort to bring our dear campus closer to students, MUSE went on a quest to gather all the craziest, weirdest conspiracy theories about our beloved building, the Anthropole. Why was it built this way? Is it haunted?

We sent out a form to compile the rumours or made up stories about the Anthropole, and the replies did not let us down. Thank you to everyone who participated. Here you go 😉

Rumours and fiction about the Anthropole

It was built this way to prevent students’ revolts.

The side stairs were used to play hide and seek.

The architect had a stroke while drawing the plans of the building.

I LOVE to think that at night there’s a ghost, the ghost of the faculty of Arts roaming in the floors (just like Helena Serdaigle), she likes to wander outside with the sheep as well. That’s why everybody likes the sheep. Also, she doesn’t like the students coming from EPFL, they don’t feel at ease in Anthropole and avoid coming :-)

It was built this way so people meet other people in a “random” way.

Breaking News: People were secretely scared of Anthropole, that is why They created Covid so students were allowed to have online classes which relieved so many.

The statues are actually people who worked on building Anthropole and who fell into fresh concrete.

This isn’t a rumour but there are showers in the basement and people totally have sex there.

The stairs move and change their pathways from years to years, just like in Hogwarts…

The architect had a stroke while drawing the plans of the building.

I’ve heard that the Anthropole was built like a labyrinth to avoid big crowds. There isn’t enough space to gather lots of people at the same place and theoretically you shouldn’t be able to make a revolution, lol. And there’s a bloody experimental lab in the basement, the place is scary and who knows what they’re doing down there.

You cannot go there between 1 and 1.30 am, I mean around the building. It’s just a rumour, I don’t know why…

The stairs were built that way so people would meet there and socialise… They must have forgotten about silently taking the lift.

It’s actually pretty much confirmed, so not technically a rumour but a fact. I heard that the way the Anthropole was built was to avoid student riots. For example the many different entrances means that one can’t block one entrance and keep people from going in, also the fact that the bathrooms are small means that students can’t meet in big groups to secretly plan a riot. When I mentioned this once a friend told me that after 1968, for a while all student buildings where built to avoid student riots. Other rumour (that is more like a rumour this time) : that the ground 0 is infamous for people who want to go have sex in a hidden place (I bet other people will bring that up).

It was intentionally built so people got lost.

We experiment on innocent students in secret labs in the basement floor (the locker rooms are a ploy) and no one ever goes there.

It’s Hogwarts (editor’s note: I wish it was.)

The stairs move and change their pathways from years to years, just like in Hogwarts…

*responses have been edited for clarity and length