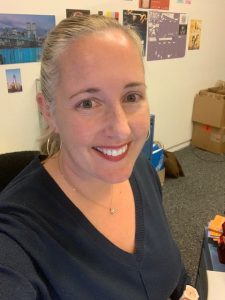 If you don’t know who Eva Suarato Adams is, I wouldn’t blame you. And yet, you should, as she is behind almost every email you receive from the English department and is an invaluable help to all the staff members who get lost in the administrative maze of the UNIL. Here at MUSE, we decided it was time we got to know who was hiding behind secretariat-anglais@unil.ch, and Eva very kindly made time in her busy schedule to answer my questions.

I begin the interview with an essential, if banal, question, and ask her how long she has been in Lausanne and working for the university. I was actually born in Lausanne, she tells me, so I have been here for many years, for ever almost! But I left Lausanne in 2000, went to the Dominican Republic, and I spent more than ten years there. We came back, with my husband and the kids, in 2010, quite a long time ago now. I started working here in 2011.

Impressed and intrigued by the exotic destination she had chosen, I urge her to tell me more. Well, to be very honest with you, when I was here in Lausanne before leaving, I used to study medicine – which was a fail! She laughs, obviously well over the disappointment. I had a brilliant “échec définitif”, just like many other people, right? So, I actually went to the Dominican Republic just to, you know, learn Spanish. I was supposed to stay there six months, but then it turned out I stayed there for ten years! And I used to work in tourism there, for a receptive tour operator, so something completely different from what I do now. But it was very interesting.

As we have brought up the topic of work, my next question asks whether she has always worked for the secretariat of both the English and the Italian departments. My contract since the beginning was really to work for both departments, she informs me. I’m very lucky because my father is Italian, so when I was a kid we spoke Italian at home. Just like all the young people here, I learned English at school. She pulls a face, clearly not impressed with the level she used to have. But then, in the Dominican Republic, I used to work for a Canadian company, which means that I had to speak English every day – which definitely comes in handy now!

Eva has mentioned quite a few languages so far, and I wonder how many she speaks. Well, we speak Spanish at home, so with French that’s four. Oh, and German too! When I tell her how impressive that is, she modestly responds to the compliment with, Oh, I’ve lost a lot of vocabulary, so I can’t really say that I speak German anymore. We both end up laughingly agreeing that in Switzerland, we always let the Swiss Germans practise their French anyway!

I  come back to her role as secretary and ask whether she notices any stark differences between the two departments she manages. First of all, I have to say I am very lucky because I work for two very nice and friendly departments. They’re quite different just because they don’t have the same size – at all. The English department is probably one of the biggest ones in the faculty, whereas the Italian department is way smaller.

‘How many students does the Italian department have?’, I ask. Mmm, she wonders. Right now, I couldn’t tell but much less than the English department. It makes a difference, you know? Also, I think one of the big differences is that some of the Italian teachers actually live in Italy. So they travel every week. I don’t get the chance to see them all the time. The teachers in the English department mainly live here. Even if they are not teaching, let’s say on Mondays, they’re still around, so I get a chance to see them.

We then turn to the more practical aspects of her job, and she tells me that one of her main tasks is to lend a helping hand to the teachers. I ask if she sees herself as the person behind the scene who fixes problems, or if that would be putting it too bluntly. I just try to help, to be honest. I don’t think that I have any magic tricks to fix everything, she adds  while laughing. I’m just trying to do my best, and really help the teachers in their admin tasks, and make sure that what I can do, is done.

‘What is the strangest request you’ve ever had to deal with, either from a student or a member of staff?’, I wonder. Oh gosh, she laughs, that’s hard to say. We have pretty reasonable people working and studying here. Honestly, let me think about it. She ponders for a bit. Nothing comes to mind really… you know, it’s probably because when I used to work for that tour operator back in the Dominican Republic, there, she  insists, I had so many weird requests from tourists that probably, now, something that would sound weird to you doesn’t sound weird to me at all. I naturally ask for an example. Well, I’ve had clients complaining about the water of the sea being too salty. That type of thing. They couldn’t understand that in the 21st century we still hadn’t found a way to ‘desalt’ the sea.

Moving on from the ridiculousness of some people, I ask Eva to pick three books she would want at her side if she ended up stranded on a desert island Oh, that’s a tough question. She takes the time to consider her possible choices. I’m thinking about the books that I’ve read recently…what was the last one…A book that I really liked was La vérité sur l’affaire Harry Québert, there is a show on TV going on about it right now. It’s one of those books that  you can’t stop reading once you’ve started – a real page-turner. I also like Dan Brown as an author… Oh, yes, another book I’ve read quite recently was from [Leïla] Slimani, a Chanson douce, a book which won the Prix Goncourt I think, in 2017 probably. A quick internet search reveals that the novel did indeed win the Prix Goncourt, but in 2016. That was an excellent book. A little dark, but very good. Of course, I work for a literary department and I enjoy books by more “serious” authors, but I haven’t got as much time as I would like to read. So, when I really have the chance, let’s say when I’m on holiday, I just want to read something light, entertaining, that allows me to escape. As she says this, I can’t help but  think about how long it has been since I’ve read a book without having to take notes at the same time. Needless to say, I wholeheartedly agree with her wish for a bit of escapism.

My next question is about authors, and she once more has to make a choice: if she could have dinner with any writer, dead or alive, who would it be? She immediately groans. That’s a tough question too! Mmm, either it would be a very, very old author, like Caesar. Seeing my surprise, she explains further: I used to study Latin, and the texts were very interesting. Plus, he is someone who had the chance to live and see many things. So that would be my pick if I had to go way back in time. And otherwise, well, many of them really, from Shakespeare to more contemporary authors like the three I mentioned before. Joël Dicker especially. He is a young author, and it would be interesting to know how he came to that career, what makes him tick as a writer.

When  I had stepped into her office earlier, Eva had mentioned that she was currently quite busy. I ask her whether this is a particularly intense time of the academic year for her. Yes, it is, because we have to work on the budget, and then we are already working on the January exam session too. And it’s also that time of the year when we have a lot of pleasant and extremely nice events. We both start giggling at this point as from her tone it is obvious there is a big “but” coming. But sometimes there are too many things happening at the same time. It’s not only because of the job. I have two kids, and there’s the school party, and the kindergarten party… it never stops!

Promising that I have two more questions and that I would then leave her in peace, I ask her if she is someone who sticks to traditions at Christmas, or if she likes to try new things at this time of the year. This immediately makes her laugh. I definitely stick to traditions! I’ve spent so many years in the Caribbean having Christmas under the palm trees! Honestly, that was probably the only time of the  year when I really missed being home. Christmas is a time when you want to be surrounded by your family, in a cold place, possibly with snow. And again, my father is Italian, so I come from a rather traditional family. Yes, I definitely stick to traditions at Christmas!

‘Last question’, I say, having thoroughly enjoyed myself and half wishing we could carry on talking. ‘Have you made any particular wishes or resolutions for the New Year? Or have you not had the time to think about them yet?’ Gosh, well, honestly… my biggest wish, and that may sound weird, is to just keep on being happy. If my family, my friends, and myself can keep on being healthy and happy, I think that’s quite good! And then all the rest will just be a bonus.

We conclude the interview on that joyful and uplifting note and, after thanking Eva for her time, I take my leave with a smile on my lips.