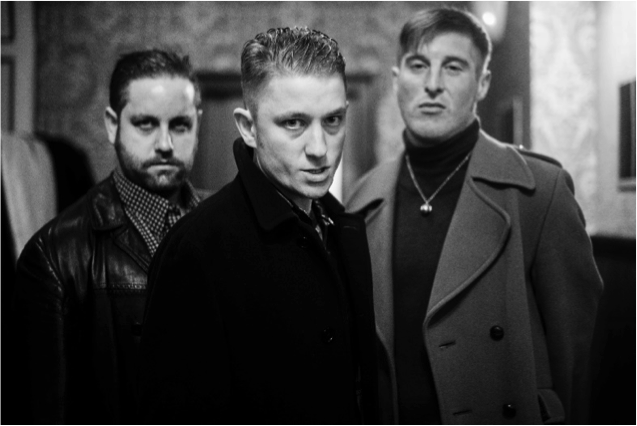 The very first impression that comes up when you listen to the album of this Glaswegian band is very simple – it is raw. By that I do not mean to say that the music or the sound is unfinished. On the contrary, there is not an instrument, a word, a note too much.

Their style is very difficult to classify; a mixture of punk, rock’n’roll, ballads. One can even say they have a sound of their own, while the arrangement remains classic: guitar, drums, bass, and voice. In addition to their trio, a saxophone and a feminine voice emerge to add an unexpected texture. In other words, as they say it themselves, they do not try to be somebody else. They do not see themselves as professional musicians, and indeed the voice sounds at times unmusical, the instruments simplistic.

The voice is harsh, the drums marching, the bass low and full, and the guitar piercing. Together they form a unique configuration that slowly drags you into an irritating atmosphere. Although it may seem repulsing, the songs, slowly and softly following one after each other, start to cleanse your anxiety.

The song order is, indeed, rightly chosen, alternating aggression with softness, distortion with clarity. The lyrics are hopelessly charged with emotions and passion. The themes chosen by the trio appear various and sometimes mysterious; vampires, nightlife, love, memories… In addition, the lyrics are scarce, which, altogether, lull you into making sense of each word – each syllable.

The whole album feels refreshing in the end. As a rough diamond, it contains a value despite its appearance. However it does not need refining. Accustomed to over-furnished songs, your ears will start to focus on the core of the melody, rhythm, and lyrics. Each part of the sound they created has its significance and is rightly balanced to give a bursting, soothing sound, sucking all your attention. I highly recommend to listen to the whole album at once. The experience only makes sense when the band guides you through their songs and force you into a realm you usually refuse to discover.