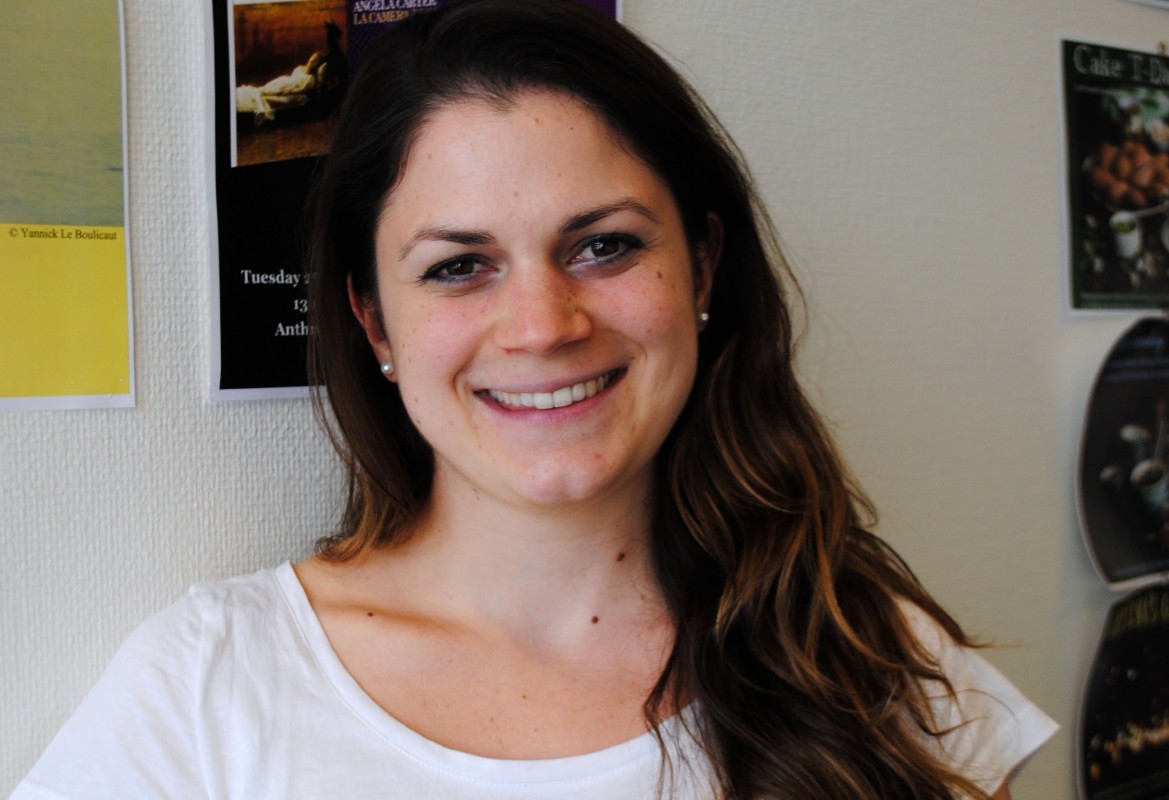 To begin with, could you tell us more about your academic path and how you came to start a PhD?

Sure, I can do that. Well, actually I haven’t been going straight towards a PhD in English. I had always wanted to be an archaeologist since I was very young, and so I started University in Archaeology and English with this clear idea in mind. I chose English as my second discipline de base because I was coming back from a year in Oxford where I had learnt English. Since I was into classic culture, I studied Latin and Greek at school instead of English, which is the reason why I decided to go and learn English in Oxford. Since I really enjoyed the experience and the language, I thought, why not go on and study English in parallel from Archaeology? But as I really got into Archaeology at University, I came to realise how hard it was to make a living out of it and it turned out to be more of a hobby than what I wanted to do with my life. At the same time, my interest in English literature was growing, especially in medieval and fairy-tale literature. As a result, I dropped Archaeology when I started my Master to make History of religions – my discipline complémentaire at the BA – my second discipline. As far as English was concerned, I carried on taking classes in medieval literature as well as fairy-tale studies and happened to be following simultaneously a class with Marco Nievergelt on Edmund Spenser’s The Faerie Queene and another with Martine Hennard Dutheil on Angela Carter’s The Bloody Chamber. Working on the two topics at the same time, I enjoyed noticing how much intertext there was between Spenser’s poem and Carter’s stories, so much so that I jumped on that subject for my mémoire. I didn’t want to do a PhD at that time – I hadn’t even thought of this possibility – but as I got to the end of my mémoire, I could feel there’d be more to be done on the topic and I guess I would have felt frustrated not to have been able to develop those pending aspects. Around the same time, Martine told me about an available assistantship in the section and encouraged me to apply. Because I realised I wanted to explore my topic more in depth, I took the opportunity, and so here I am!

How did you realise English literature was your thing?

I guess I already knew it in Oxford, though unconsciously maybe. But, as I’ve told you, I had been interested in Latin and Greek culture for a long time, since my teenage-hood. Because it was such a passion, I was not ready to give up on it so quickly, so I thought I would at least give it a serious try. And yet, I really got into English literature when I was in Oxford and I enjoyed so much going to those bookshops which also have little cafés in which you can read whilst having a cup of tea. This is one of those great things they have in England and I found all this really appealing. Nevertheless, I had not realised yet that English literature would be so central because of my other centre of interest. It became clear when I actually started studying that English literature was something I could not live without. I wasn’t thinking of a PhD yet though, but I realised that I was definitely keen on reading in English and that I would always want English books to be in my living-room.

Can you tell us more about your job in the Department? How do you juggle between your own research, your teaching and the assistantship you do with the section?

Well, juggling is really the most difficult part of the job. All these tasks are interesting and I love doing them all. I also love reading, but this is probably the activity to which I’ve got less time to give unfortunately. The assistantship requires a lot of administration, but then it gives you the feeling to be part of the Department, which is also nice. The main difficulty is to make sure that teaching and administrative tasks do not take over your research. You have to be careful to devote 50% of your time to research and another 50% to the other tasks, but this is really a hard thing. Inevitably, I find myself working less on my PhD during the semester when teaching and administration take over. But I try to focus more exclusively on my research during the semester breaks. I also try to set up deadlines for articles and conferences throughout the semester as another way of working on my research and making indirect progress on my PhD by exploring specific aspects of my topic.

How does the life of a PhD student look like? How do you carry your research itself?

When I started, I had this ideal plan in mind of spending my first three years on research and then turning to the writing stage. But I quickly realised that this was a bit of a utopia, because I did not take the teaching into account. So what I try to do now is to set up aims connected to the PhD thesis for the semester breaks. As I said, working on articles and conference papers during the semester helps make progress, too. But it is really important to set precise goals all the time, otherwise you’re faced with too many things to do simultaneously. Even if I don’t reach all my goals, it helps me organise my thoughts and research, and it also allows me to get a broader view of my PhD to spot what is missing and should still be addressed in my work. Five years may seem pretty long to complete a PhD, but it’s actually difficult to deal with such a limited amount of time. Even if I theoretically anticipated this, time still goes faster than excepted in reality and it’s hard to find ways of dealing with that. But I reassure myself with the fact that even if I don’t actually write, I am still working on my research. Part of the writing process does not take place in the redaction itself, which I find reassuring. I guess I’d get depressed it that wasn’t the case!

Now let’s turn to your PhD itself. What is your research actually focusing on? And how did you decide to explore this particular topic?

My PhD thesis is the continuation of my mémoire. For the mémoire, I compared Edmund Spenser’s The Faerie Queene and Angela Carter’s collection of fairy tale rewritings, The Bloody Chamber. This was my initial corpus of study but as I got to develop my PhD thesis, I included more texts by Carter that resonate with Spenser’s epic poem, for instance The Infernal Desire Machines of Doctor Hoffman. My principal aim is to study the intertexts and connections between these two authors’ works. We know that Carter took classes in medieval and early modern literature at University and scholars have acknowledged the links between her texts and medieval and Renaissance literature in a few studies, but no one has fully explored the influence of medieval literature on her work, so I thought there was a gap to fill in there. The part of my PhD thesis which studies the connections between The Faerie Queene and The Bloody Chamber is very much centred on intertexts, on the textual relationships between these two works, but as I explored my topic more in depth, I started to bring in other texts, such as Carter’s The Infernal Desire Machines of Doctor Hoffman, which oriented my research towards another type of comparison, namely through the genre of allegory. Spenser’s poem is an allegory and Carter reclaims the genre in her own writing. I am now asking myself such questions as ‘what does it mean to reclaim this genre for feminism? how does Carter’s take on allegory change its conventions?’ etc. So my PhD got to adopt a new angle, more theoretical and genre-related, making it a much more complex project.

Coming back to your job with the Department, I know that you had to take on one more class this semester because of the great amount of new first-year students. How do you explain the growing size of the English Department and its attractiveness for new students?

That’s because we’re cool! (laughs) More seriously, I see different reasons explaining this popularity. First of all, I guess students are willing to study English and American literatures because they’re massively present in the media today. For instance, a lot of Hollywood films are based on that kind of literature. It is really part of the culture we’re exposed to in our everyday lives. Then, students are also probably interested in English as a language. Since it is the most used language in the world, they might feel the need to master it. These students may be disappointed though, because they haven’t quite realised what we do in the Department. We always lose some students at the end of the first year, possibly for that reason. But in short English, both as a language and a component of culture, is part of the atmosphere we are all bathed in, which may explain many students’ interest. I also think that, within the Department itself, we offer a range of subjects that are quite attractive and more interesting than more traditional fields. We are open to new trends, such as Fairy Tales, Fantasy, Gothic fiction, Gender and Queer Studies, Translation Studies, and many others. So I guess these are attractive and more modern fields than what may be offered in other disciplines.

Would you have any advice for students wishing to pursue an academic career?

Since I personally never thought of doing a PhD before actually starting one, I have no advice on how to situate yourself during your studies. But I’d say that students interested in an academic career should always do their best in classes and really invest themselves in their studies. They should also talk to their teachers and supervisors about their interest, because it’s always good to let them know so that they can help with advice. But I think the most important advice I could give students is to work on a topic they’re passionate about. A PhD really takes up all your life and, even when you’re not actually working on it, it’s always at the back of your mind. The MA memoire, taking place over six months or even a year, is already a good try out to see if you’re ready to spend three or five years of your life on a topic. So, in short, what I think is most required if you would like to write a PhD is passion and enjoying working on a topic and a set of texts. Your thesis then becomes so closely related to your life that you also find yourself enriched by your topic. I personally connect quite strongly to a quote by Judith Butler who said that “We lose ourselves in what we read, only to return to ourselves, transformed and part of a more expansive world.”[1]

[1] Judith Butler’s McGill Commencement Address on Value of Reading and Humanities, 30 May 2013.