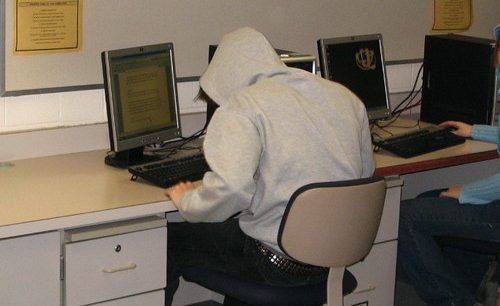 Image: “Writing Class 1” by kchichester is licensed under CC BY-SA 2.0

This semester, the MUSE team wanted to get an insight into the life of the students and instructors and find out a little more about the new habits that we have all acquired over the past few months. So, the MUSE team sent out a form to students and staff of the English Department and asked for their anonymously juiciest experiences on the platform Zoom, all of which are compiled here.

We warmly thank everyone for their amazing collaboration and are celebrating every single Zoom confession.

I fell asleep during a lecture lol

Woke up, opened Zoom, put my recording phone next to it, went back to bed.

Fully blamed Zoom for being late to teaching my class.

All of last semester I taught in a spare room where only a third of the ceiling was painted (because I got lazy and stopped midway through painting the ceiling, 10 years ago). I had to adjust my camera so that only the painted part of the ceiling showed, but some days I forgot. On those days, I appeared to be speaking from the dug-out of a war zone (the unpainted part was in a bad state) – I don’t know if anyone else noticed and maybe I shouldn’t be confessing it now. My sister’s birthday present to me was to paint the ceiling while I was away so, no more Zooms from our war correspondent.

Is it rude to smoke a cigarette with your camera on during a lecture?

I was eating lunch during my class (grilled cheese and tomato soup) and didn’t realise that while my video was off… my microphone wasn’t, thereby exposing the whole class to my horrible chewing sounds!

Not my story but my sister told me that once in one of her master’s classes, the professor would keep on popping in and out of the meeting because of bad connection. The second time, she reappeared in her… car. She was parked and for some reason, the connection was better. Then she left. Minutes later she joined the Zoom meeting again, but this time that woman was DRIVING. So yeah, she might have created the very first carpool Zoom class. Take notes, James Corden.

I once reeaaally needed to go to the toilet but like… For number 2. I didn’t want to miss the class so I cut my camera and microphone, put a sticker over my camera just in case, took my laptop and brought it with me to the toilets. And did number 2 while following my Zoom class.

I’m pretty sure I followed several Zoom classes while naked in bed because I had just woken up. Of course my cam wasn’t on.

Not super fun (sorry) but I once had a violent panic attack at the start of a Zoom class (for no reason, it wasn’t the fault of the Zoom or the teacher’s or anything, just my brain gratuitously messing with me). I cut everything and called a friend.

I once slept through an entire Zoom class.

I play Among Us on my phone during class on a regular basis, oops.

I peed during Zoom classes at least 3 times if not more (brought my laptop with me and turned off mic and cam). Why miss the class if I can bring it with me to the bathroom?

This might not be very funny, but it is to me so I’ll share it anyways. Today I was supposed to be in this Zoom call at 10.15 but I had to go to the dentist to get my wisdom teeth out at 10.30. I knew it wouldn’t take long to do it, but I didn’t want to connect late and possibly not get access to the call. Therefore, I left my computer on, said hello; went to the dentist (scared to death because there was a storm); came back home 45 minutes later, with half swollen face, just in time to say “Merci, au revoir”. The saddest part of this ordeal is that the lecture was recorded…so it wasn’t worth it

So I sometimes do something else on my computer while I’m in a Zoom class, and one of the things I did today during class was to check my mails. Among them was a notification from a website I have an account on. It’s a website where I sell pictures of me. I checked on my account mechanically, and then it struck me that I was doing that during a Zoom class and it’s kind of weird hahaha

One of the most stressful moments of my week is trying to listen to the last 10 minutes of my AALS 1&2 class as I change into yoga clothes and race out the door to my weekly yoga class, desperately hoping that my camera doesn’t come on as I’m topless and balancing precariously with one leg in my pants and the other flailing in the air.

If Zoom means I get to see more cats on screen, hear cats playing with toys and cats purring into microphones, and watch my professor calmly pour his coffee before commencing lecture, I never want to return to in-person teaching.

I started the semester with such good intentions: I had a designated home office space, note books, note taking strategies, a clear timetable, I was going to always turn on my video… Yesterday I woke up at 12:15, just in time to roll over and fire up my Zoom class on my phone without leaving the comfort of my blankies. Oops.

I tended to switch off my camera and mic to play with my doggo while listening to the lectures on bad days, kept me calm and made the learning a lot fluffier ! Also, who didn’t switch on their camera because they were in a PJ-day mode, all wrapped up in a cuddly blanket? I guess I am not the only guilty PJ-sinner

I sorted, sized, folded and counted 70 items of tiny newborn clothes while streaming my Anthropology class yesterday. Studying from home has its benefits for some populations, it’s permitted me to go back to school while pregnant.

One Friday morning I had a dental surgery (a gum graft) and right after it I had a Linguistics class (taught by Jennifer). So I got home, ate some cold soup and attended the Zoom class with a huge icepack on my face (so I looked ridiculous haha) and talking only via the chat. I kept doing that for the following week, too (talking mainly via chat). I’m still recovering so idk when I’ll talk normally again lol

During the first week I attended a bunch of classes – that is Zoom classes, I mean yay – to finalize my schedule as we love to do in the Faculty of Arts. Anyway, I made the effort to put make up on this first week to have the impression to have somewhat of a routine. And I don’t know what happened, but I received emails from no less than three strangers; either commenting on my “perfect make-up” (I mean why a guy wouldn’t notice that on Zoom?) or finding my unil email (HOW?) to ask me random questions about certain classes. I don’t know if this is the new way of meeting people or sliding into someone’s DMs, or if this is creepy or cute or funny? Either way it made me laugh in this strange time ahahah

One day we were on Zoom in groups of two. I was with this guy and we did some exercise together. When we were coming to the end, I noticed some smoke close to him. I was afraid that his computer was burning, but it was a cigarette. The dude was smoking during the lecture!

*responses have been edited for clarity and length