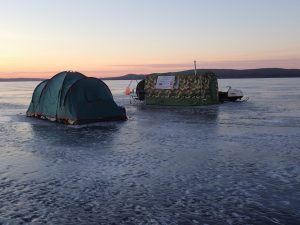 Since most of the observation of under-ice life to date has been done in polar, snow-covered lakes, attention has been essentially given to heterotrophic and mixotrophic processes by which energy flows are maintained in darkness. However, wind can sweep off the snow from the surface of large ice-covered lakes. The resulting clear-ice can allow as much as 95% PAR transmission, therefore fuelling substantial primary productivity in winter, similarly to the situation classically observed during Arctic and Antarctic interseasons. In oceans, ice-associated (sympagic) and pelagic autotrophic production under transparent ice has been repeatedly shown to exert a crucial role not only as a food source for over-wintering zooplankton, but also as a crucial supplier of essential nutrients from which secondary consumers benefit all over the ice-free season. Such results emphasize how climate change might ultimately threaten the plankton phenology, the whole energy flow and secondary production within cold oceans.

Freshwater science clearly lags behind and, to our knowledge, very few studies have addressed the diversity of zooplankton over-wintering strategies in ice-covered lakes, while the contribution and role of sympagic and pelagic primary production in winter within zooplankton food webs is virtually unknown. In this work, we quantified zooplankton diversity and migration diurnal strategies under the ice of lake Onego and unravel the energy flow within under-ice food web and the diversity of feeding trade-offs within different zooplankton taxa and stages. 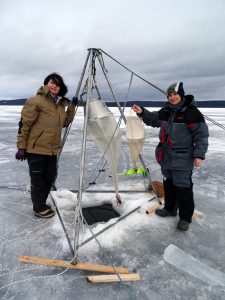