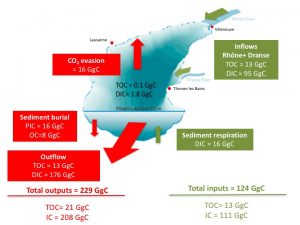 If inland waters have recently been acknowledged as significant reactors of the global carbon cycle, light has been essentially shed on wetlands, permafrost and humic lakes, under the overwhelming paradigm that lake supersaturation with CO2 arises from metabolic processes. Within this picture, large and clearwater lakes have been largely overlooked, considered as neutral to the atmosphere. As a result, our knowledge about the carbon cycle in such lakes is clearly deficient. For instance, in Switzerland, a heuristic carbon budget attempted on the heavily studied and highly monitored Lake Geneva ended up unbalanced, C outputs being twice higher than the inputs. Estimated CO2 outgassing reaches surprisingly high numbers. Rough estimates suggest that the 10 largest Swiss lakes emit as much CO2 as fossil fuel combustion of total Swiss agriculture. The example of Switzerland shows that large and clearwater lakes could be a central feature of a national carbon budget and plead for a revision of our C conception in such environments.

The motive of CARBOGEN is therefore to address the carbon cycle of Lake Geneva through two objectives. The first one is to close the lake carbon budget by refining flux estimates accounting for the large temporal and spatial variability of the carbon processes and by identifying and quantifying the missing sources. The second aims at untying the mechanisms behind the long-term C variability, and therefore to quantify the human contribution to such changes. For that purpose, CARBOGEN relies on an integrated, process oriented perspective on the carbon cycle of Lake Geneva, combining field surveys, high-frequency monitoring, bioassays and modelling:

-Short- and long-term drivers of the C-cycle of Lake Geneva: Pascal Perolo (The CO2 guy)

-the contribution of inorganic processes to the C cycle of Lake Geneva: Nicolas Escoffier (The DIC guy)

-The sources and fate of organic carbon: Thibault Lambert (The DOC guy)

-mechanistic and machine learning models: Gael Many (The modelling guy)

-a comparison of long-term changes in C Cycles in Swiss lakes : Marttiina Rantala (The Paleo Guy)