Doctoral researcher Hazel Blair reports on this year’s international research day at the University of Lausanne. 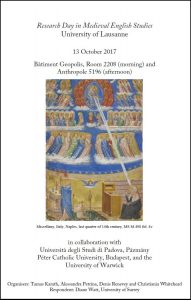 The format of the research day was friendly and collegial, and those presenting benefited not only from the input of the respondent, event organisers, and other senior colleagues, but also from each other and a select number of MA students interested in medieval English literature. 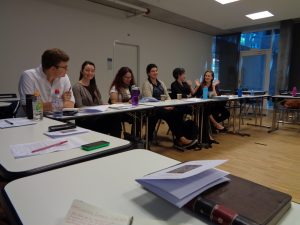 Then Silvia Demo (Padova) spoke about her research into the social and educational lives of surgeons in late medieval London, arguing that the line that divided learned and unlearned healers was not as impermeable as one might initially assume. Both presentations prompted lots of discussion, and interesting reflections on the quagmire of questions surrounding academic ownership.

After lunch at UNIL’s Restaurant de Doringy, we returned to a fascinating presentation by Dr Ágnes Kiricsi (Károli Gáspár University of the Reformed Church, Budapest) on Matthew Paris and halos in the medieval sky, which highlighted the great (and largely untapped) opportunities afforded to modern medieval scholarship by 21st-century science.

I then presented my own interdisciplinary research on the cult of St Robert of Knaresborough and the Order of the Holy Trinity in medieval England, introducing colleagues to the contents of BL MS Egerton 3143. Ágnes and I both received valuable feedback from the room, and several pockets of further discussion opened up during the coffee break.

Louise Campion (Warwick) opened the final session by presenting her research on the Middle English version of Bridget of Sweden’s Liber Celestis, a lengthy and notoriously difficult text that she introduced with clarity via her discussion of the relationship between Bridget’s voice and textual images of domestic space.

Finally, Dr Andrea Nagy (Károli Gáspár University of the Reformed Church) spoke about her project to revise her doctoral thesis for publication as a book. Her interest in the representations of female characters in Old English poetry sparked a great deal of discussion on the way we interpret women in medieval texts more generally, and prompted the room to reflect on the authority of many of the dictionaries and word-lists that we rely on for our day-to-day research.

Concluding the day, Diane Watt examined the topic of voice in medieval English literature, and spoke about the fruits and challenges of interdisciplinary and transnational approaches to medieval English – themes that appeared in many guises throughout the day.

In closing, she addressed the insidious problem of androcentrism in medieval English studies, particularly in the fields of editing and translation. She asked us to think about the extent to which this might be hampering our research, and in so doing raised the question of the need for widespread reassessment of edited and translated texts frequently taken as gospel.

Once again, the event drove home the fact that, no matter where we are in our academic careers, our work will always benefit from the input of both junior and senior colleagues. With this in mind, we look forward to catching up and discussing one another’s progress in Budapest next year.

The Research Day in Medieval English Studies is an annual international event organised by researchers from L’Università degli Studi di Padova (Italy), Pázmány Péter Catholic University in Budapest (Hungary), the University of Warwick (England), and the University of Lausanne (Switzerland).