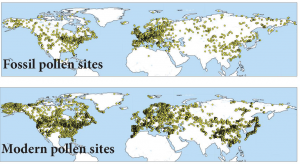 A key aspect in understanding the cause and impact of global climate change is the role of atmospheric dynamics , which determines many aspects of climate at the regional scale, particularly in the mid-high latitudes. The HORNET project seeks to improve our ability to understand past changes in atmospheric dynamics by reconstructing the spatial and seasonal pattern of change in temperature and precipitation over the last 12,000 years across the entire Northern Hemisphere extra-tropics. The project will do this using over 3000 Holocene fossil pollen sites and a pollen-climate calibration dataset of over 20,000 modern pollen samples. 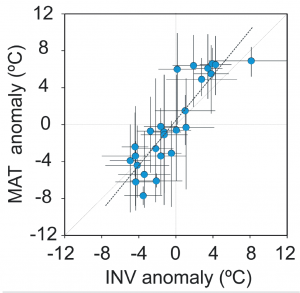 Fossil pollen provides one of the most widely available sources of proxy climate data for the Quaternary period. Quantitative climate reconstructions from pollen data were first pioneered over 70 years ago (Iversen 1944) and since then the number of different methods has expanded greatly. PC-MIP is a new initiative to help improve collaboration and coordination within the pollen-climate community, to compare and review the main methods currently in use, and to make recommendations for best practice and future development.

Third workshop: 2019, Switzerland (to be arranged)

The European (now Eurasian) Modern Pollen Database (EMPD) was established in 2013 to provide an community-driven, fully integrated, harmonised and quality controlled public data repository for pollen surface samples. This first stage of the EMPD was a big success thanks to the participation and generosity of over 70 individual scientists and research groups. We have now almost completed stage 2 of the EMPD, which will expand the current dataset of around 4800 modern pollen samples to nearly 8000 samples. These new samples come from across the whole of Eurasia, thanks to over 130 different collaborators in 22 different countries. 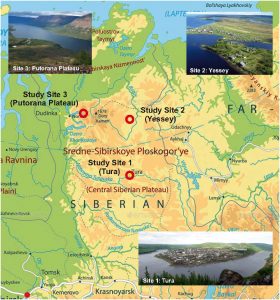 The Central Siberian Plateau has traditionally been very difficult to access for scientific work, with no road system or major population centres, only a restricted number of navigable rivers, and main entry points that have been politically sensitive such as the closed city of Norilsk. Consequently, our knowledge of past and recent climate and environmental change in this enormous region (three times the size of France) has been remarkably limited. Recently however, the opening of the area for tourism and recreation and improvements in scheduled air services now make it possible to visit the region without military support.

The main aim of the expedition will be to collect and analyse Holocene peat/sediment cores and modern surface samples from 3 contrasting locations north and south of the Polar circle.

LGM-VEG The vegetation of Europe during the Last Glacial Maximum (21,000 years BP) 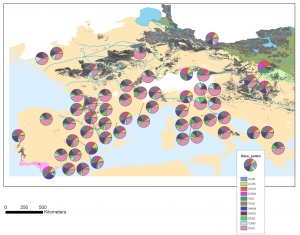 Climate model simulations of the Last Glacial Maximum (LGM) indicate that the climate was temperate enough over western Europe that forest extended as far north as the southern edge of the Scandinavian Ice Sheet. These results however are contradicted by pollen data which suggests that the region was largely dominated by treeless steppe. One problem with this pollen data however is that it is composed of only a few (<20) poorly dated sites. As part of the LGM-VEG project we have compiled a dataset of around 70 well dated pollen sites for the LGM, which we are using to better understand the spatial pattern of vegetation across Europe.

STRADITIZE: An open-source program for digitising pollen diagrams and other similar types of stratigraphic data

A common problem in the digital age is data that is not available in digital format, particularly data held in figures that first need to be ‘digitised’. Software packages already exist to digitise simple ‘x-y’ figures, but nothing has until now been available for more complex figures with multiple x-axis on a common y-axis. These types of figures are common in the Quaternary sciences, where multiple types of data has often been gathered from analysis on the same sediment core or section. For instance, pollen diagrams where multiple taxa are plotted against a common depth or age scale based on the analysis of a series of common samples. STRADITIZE is an open-source program designed to automatically digitise stratigraphic diagrams where multiple taxa or other types of analysis are plotted against a common age or depth scale.

We are also involved in a number of other projects, including work on the changing environmental niche of domestic and wild fauna in Africa during the Holocene (Leane Phelps, UNIL), and the biomisation of LGM-Holocene pollen data for inverse modelling as a basis for pollen-based climate reconstruction (Kenji Izumi, LMD/CNRS/UPMC). We are also working on a pollen-based reconstruction of Holocene forest cover for the Northern Hemisphere extra-tropics.