Workshop- How hot was the Holocene?

Interest in current and future warming has focused attention on climates in the past when the Earth was warmer than present. Evidence suggests that temperatures were higher than today during the early-mid Holocene over higher latitudes of the Northern Hemisphere, but the global picture remains poorly understood.

Uncertainties are large because current studies remain based on either sparse global site networks, or denser site networks that are limited to only a few developed regions of the Earth. The CLIMATE-12k workshop aims to utilize recent improvements in spatial coverage to create a community-based estimate of global temperature change over the last 12,000 years using a much larger network of published marine and terrestrial temperature reconstructions than previously investigated. 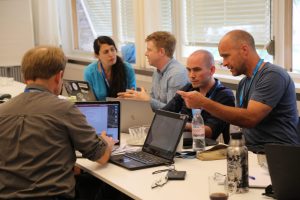 This new analysis will allow us to better place recent and future projected warming in the context of changes in climate over the last 12,000 years, as well as to investigate an apparent discrepancy between reconstructed and modelled global temperature change during the Holocene known as the ‘Holocene temperature conundrum’. The workshop is designed to provide an important contribution to the next IPCC report, with a synthesis product planned for submission by the WGI deadline of December 2019. The workshop will also establish the foundations for a larger futurecommunity effort to document and explore the causes of Holocene climate change at the global scale.

The workshop has 3 specific aims:

1. To create a new data synthesis of published marine and terrestrial quantitative temperature reconstructions from sites throughout the world over the last 12,000 years.

2. To then use this synthesis to calculate global mean temperature through the Holocene, as well as other seasonal and regional temperature metrics. These results will then form the basis for comparison with transient Holocene climate model simulations.

3. To create the foundations for a new future community effort to document and explore Holocene climate at the global scale, which will also involve other aspects of climate such as precipitation. A key objective will be to establish for the first time a centralized, integrated and fully documented public database of Holocene climate reconstructions.

Outputs: The workshop will deliver the following:

1. A large data product with associated paper describing the source, location, collection and data attributes of the CLIMATE-12k database of site-based temperature reconstructions, and including an discussion of future directions. All data contributors will have the opportunity to join as co-authors of this paper.

2. A public database of regional to global Holocene temperature reconstructions. This will provide a ‘one-stop-shop’ for reconstructions that are currently only available from different locations, and with incompatible formats and levels of documentation.

3. A high-impact paper describing the temperature evolution of the Earth over the last 12,000 years and the ability of models to simulate this.

Teams will first meet by tele conference in January, and then again in March, as required.

This is an open workshop with financial support for approximately 30 participants.

How to apply: If you are interested in applying to attend the workshop please fill out the on-line form as soon as possible HERE (https://bit.ly/2BtKTZK). We will start considering applications after the 15 of December and will continue to consider applications until all places are full.

Please note that there are only a limited number of places available for the workshop and that funding is limited. Applications will be prioritized according to relevant expertise and stated motivation, as well as the amount of requested financial support. We would however like to particularly encourage applications from scientists who are female or early-career, as well as those from developing countries. Please note that participation in the workshop also involves a commitment to participate in the pre-workshop activities where necessary. The organisers reserve the right to exclude any participant who does not actively participate in these activities before the main workshop.

The workshop will take place at the Grand Hôtel des Rasses, near Ste Croix in the Swiss Jura from Monday 10th of June (arrival pm) to Thursday 13th of June 2019 (departure pm).

Workshop Support: The workshop is funded by the SNF HORNET project (PI Basil Davis). Economy travel to the workshop and all meals and accommodation at the event will be covered for all invited scientists.

Independent participants: There will be a small number of workshop places open to self-funded participants. Please contact Basil Davis for more information about the costs and options.

More practical details about the workshop are available here