The Holocene Climate of Europe

Mauri et al. (2015) The climate of Europe during the Holocene- a gridded pollen-based reconstruction and its multi-proxy evaluation. Quaternary Science Reviews 112, 109-127

If you would like other data products from this analysis, such as the original data for each of the pollen sites, then please contact me directly (basil.davis@unil.ch).

The Holocene Forest Cover of Europe 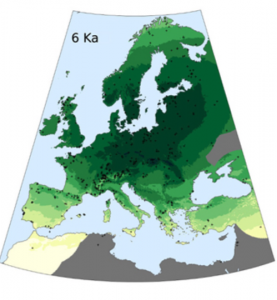 This is a gridded pollen-based quantitative reconstruction of forest cover for Europe over the last 12,000 years BP by Marco Zanon and published in Zanon et al. (2018). It is based on the calibration of past fossil pollen samples against a modern pollen dataset for which modern forest cover has been derived from remote sensing.

How to reconstruct climate and tree cover from pollen data: a step-by-step guide

This is a tutorial to teach yourself how to reconstruct climate and tree cover from pollen data using the popular modern analogue technique (MAT). It was written together with Steve Juggins (who really deserves most of the credit), and Marco Zanon who also helped me run the EPD training session where it was first used. In it you are taken step-by-step through the reconstruction process for an example pollen site using Steve Juggins RIOJA program. The tutorial should take around 2 hours to work through and runs on the R platform. 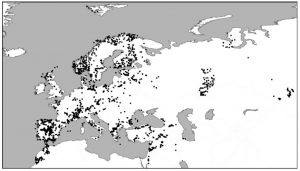 The EMPD is a database of around 4800 modern pollen surface samples. Details about the EMPD are on the web page here. This is where you can find information about the database, download the first version EMPD-1, and learn how to submit data to the second version EMPD-2.

Web page for the EMPD

This is a Python program developed by Philipp Sommer for digitising pollen diagrams and other types of stratigraphic diagrams with multiple x-axis (e.g. different taxa or geochemical analysis) plotted against a shared y-axis (e.g. depth or age). At present it is still under development, but is fully functional. A link is included below to a short presentation that Philipp prepared for EGU 2018.

Sommer at al. (2018) EGU PICO presentation: STRADITIZE, an open-source program for digitising pollen diagrams and other types of stratigraphic data.

The ‘official’ web page for the APD can be found here. However you will find that many of the datafiles are incomplete or missing and the downloadable version of the database (in Paradox format) does not contain all of the sites, many of which have to be downloaded as individual files. The APD modern pollen data published in Gajewski et al (2002) and Vincent et al. (2007) is not available on this website, and has never been made public other than some old Tilia files which can be found here. 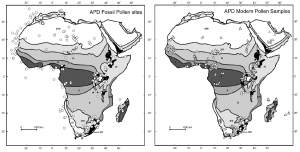 We haven’t been able to do much about the missing metadata, but with the help of John Shekeine we have been able to stitch together the files into a complete database. The fossil data includes a total of 303 sites; 245 sites included in the Paradox version of the database, 41 sites that are included as individual text files, 15 sites that are included as individual Tilia files and 2 sites which should be in the database but we have had to obtain from the original authors. We have also included 1619 modern pollen data which we eventually obtained from the Database Manager and stitched together from the 20+ Tilia files which we received. Usefully, we have also created a single merged P_VARS (taxa) table for both the modern and fossil data.