This novel Swiss National Science Foundation (SNSF)-funded (SNSF #320030_173129) technology (Di Sopra et al. MRM 2019)1 1 deliberately removes contemporary hurdles in CMR including operator dependency and time inefficiency (many contemporary methods sample data during 2 percent of the time only). The Free-Running Framework obviates the need for ECG triggering, ECG lead placement, breath-holds, and navigators. This shifts the paradigm from a prospective scan parameter- and imaging plane selection to a single-click solution where 3D data can freely be queried for structural and functional information retrospectively and after the scan. This significantly reduces operator dependency. As for time efficiency, data are no longer collected at regular intervals synchronized to the heartbeat, but they are rather collected continuously with high temporal resolution and irrespective of the heart’s position or contractile state. Motion consistent data throughout the cardiac cycle and for multiple respiratory levels are then simply extracted after the fact. Arguably, no other CMR technology collects more high-resolution 3D data of the heart per unit time, and the scan efficiency has improved more than 15-fold. 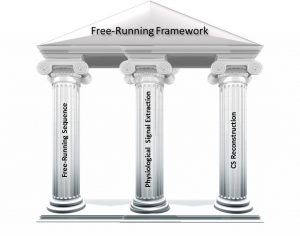 The Free-Running Framework rests on three major pillars. The first pillar includes a non-interrupted free-running sequence that continuously collects 3D data of the heart during a few minutes regardless of the heart’s contractile state or the respiratory position. A 3D radial trajectory that is continuously being rotated by the golden angle forms one of the central ingredients. This sequence has been implemented at 1.5T and 3T as either a bSSFP or a gradient echo version. Contrast agents are an option but not a requirement. The spatial resolution of this method currently ranges from 0.9-2.5mm, the sampling efficiency is 30 percent, and fat signal saturation can either be obtained with conventional fat suppression (Coppo MRM 2014) 7, FISS (Bastiaansen MRM 2020) 12, or LIBRE (Bastiaansen MRM 2018 13, Bastiaansen MRM 2019 14,  Masala MRM In Press 2020). Sophisticated signal processing forms the second pillar and enables physiological signal extraction from the acquired data rather than from external gating and triggering devices (Di Sopra et al MRM 2019) 1. With these physiology signals, motion-consistent sub-sets of the free-running data are extracted and assigned to respiratory and cardiac bins. By exploiting sparsity in the cardiac and respiratory dimensions among these bins, compressed sensing k-t-SPARSE SENSE reconstruction, our third pillar, leads to more than 100 cardiac- and respiratory motion-resolved 3D images per dataset.

At this juncture, the free-running framework supports anatomical and functional imaging of the whole heart with high temporal and spatial resolution. However, and owing to the modular structure of this concept, our team has now begun to deliberately expand the free-running framework to 5D flow imaging (Collaboration Dr. Michael Markl and Dr. Liliana Ma Northwestern University Chicago, Chicago, IL, USA). In parallel, new avenues for 5D tissue mapping and fat fraction mapping are independently being explored by the teams of PD Dr. van Heeswijk and Dr. Bastiaansen. Together with Dr. Mark Fogel and Dr. Kevin Whitehead from the Childrens Hospital of Philadelphia, Philadelphia, PA, USA, our framework enables highly detailed anatomical and functional imaging of the heart in pediatric patients. At the same time, high-resolution structural imaging of the heart to improve our understanding of arrhythmias is pursued by Dr. Jerome Yerly in collaboration with Dr. Hubert Cochet, Dr. Pierre Jaïs, Dr. Bruno Quesson, and Dr. Aurélien Bustin from LIRYC, University of Bordeaux, France.

In 2014, Simone Coppo was bestowed the Potchen Award for his free-running sequence at the annual meeting of the SMRA in Rome, Italy. In the following year in Cincinnati, Davide Piccini was the winner in the same category for his work on motion-resolved reconstruction, which was also selected for the MRM Editor’s Pick in 201715. In 2019, at the SMRA in Nantes, John Heerfordt was handed the Potchen Award for his SIMBA technology that builds on the free-running framework. In 2019, the MRM paper of Lorenzo di Sopra and Jerome Yerly that describes the free-running framework1 was the MRM Editor’s Pick in December.