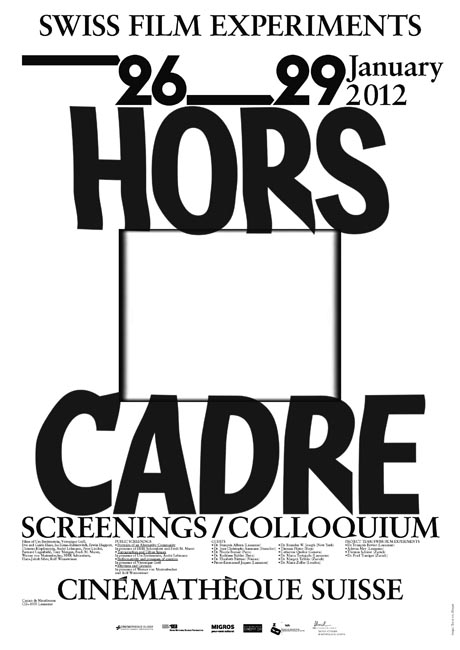 The international colloquium Hors-Cadre and the associated program of Swiss experimental films organised at the Swiss Cinémathèque extends and offers a first assessment of the research project Schweizer Film Experimente funded by the Swiss National Science Foundation, conducted at the Zurich University of Art and design (ZHdK, Institute for the Performing Arts and Film) and the University of Lausanne (department of Film History and Aesthetics). The event gathers researchers from Switzerland with speakers and respondents from europe and the United States, all specialists in the fields of experimental cinema and contemporary art. At stakes is the articulation of questions of methodology for the historical study of a fragmented, scattered and rather marginal phenomenon, with the analysis of the aesthetic, social and political dimensions of a body of works that precludes all pre-existing categorisation. The aim is to render this field legible by defining several relevant interpretative frames. Thus, the detailed analysis of singular cases embedded in the Swiss context and the resort to frames of reference that exceeds and contests nation-based questions are closely intertwined. Among many possible ways to investigate, we have chosen two main directions so as to offer the most precise survey of a research still in its making: sociological and institutional readings based on studies of critical reception, structures of production and diffusion, as well as aesthetic and methodological perspectives which are confronted with diverse interacting fields, mostly filmic experiments, contemporary art and militant cinema. This distribution is reflected in the structure of the colloquium, which takes place over two days, alternating conferences and discussions that will lead to general debates with the guests around the following questions: How to write a Minor History of a fragmented cinema? and On interactions between experimental cinema and contemporary art. By so doing, we aim at identifying multiple and non- unified experimental filmic practices at the intersections of amateur cinema, artist film and forms of dIY work by filmmakers that subsequently come to be integrated within the professional sphere. our use of the category of “experimental cinema” is intended to designate a set of filmic research thought as an autonomous field in the 1960s–1970s and the inheritor of the historical avant-gardes, whose nature itself is still open to debate (hence the multiplicity of terms such as: different cinema, independent cinema, marginal cinema, underground cinema, other cinema, young cinema, beatnik cinema, visionary cinema, artists’ film…). In this regard, it is remarkable that Switzerland did not see the emergence of a scene modelled on the New American Cinema or the British Structural-Materialist filmmakers. Instead, one can observe multiple isolated experimental approaches, which sometimes refer to the two former, or others (abstract cinema, psychedelic cinema, diaristic forms).

These questions also traverse the film program of Hors-Cadre, taking place over four evenings, respectively entitled: Portraits of an Alternative Community; Topographies and Urban Spaces; Performativity and Processes of Creation; Rhythms and Gestures. If the film program does not reproduce the disciplinary boundaries of the conferences, it nevertheless echoes similar issues of heterogeneous practices and of formal strategies by setting artists’ films against the work of locally established filmmakers or evolving outside the traditional systems of production. Most works comprised in the program evoke a forgotten chapter in the history of experimental cinema that stands at the margins of the emergence of the New Swiss Cinema while it reflects enterprises undertaken on an international scale. Made by artists or independent filmmakers, these films are either portraits that make use of discontinuous editing techniques and superimposition, documentation of performances, abstract animation, experiments with elementary formal structures, essays on creative processes, as well as filmic diaries. Yet, limitations in the curatorial process should be stressed since the selection of films was restricted by a contingent limited access to certain pieces of work, nor does it fulfil any theoretical conceptualisation or academic endeavour aiming at reconstructing the emerging modes of alternative representation.