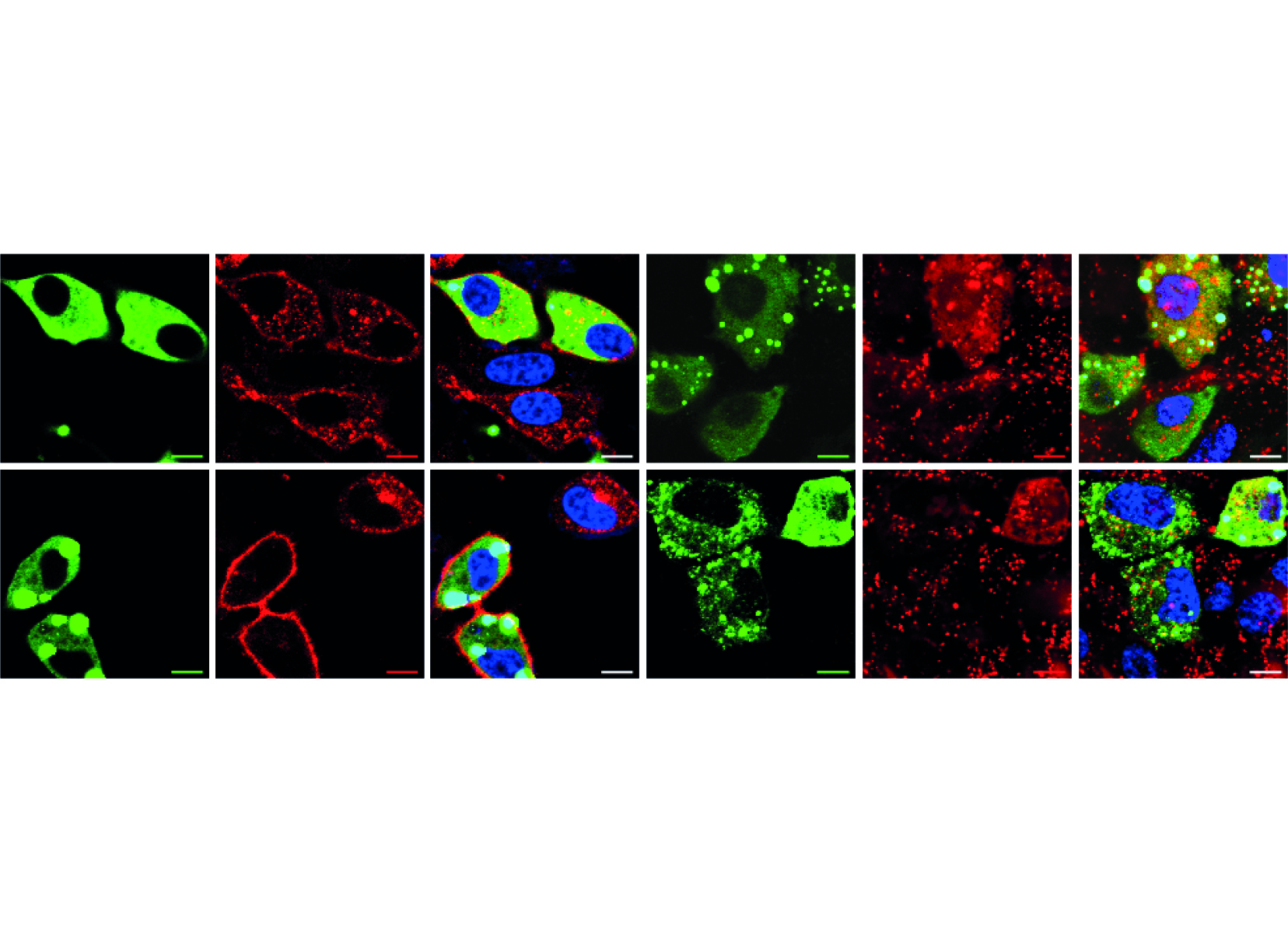 Cell-permeable peptides (CPPs) allow the intracellular delivery of cargo molecules that are hooked to them. CPPs provide an efficient mode of transfer for bioactive molecules inside cells, especially in conditions when transcription or translation of these cargo-encoding sequences is undesirable or hard to achieve. CPPs generally correspond to short cationic peptides. They are often present in anti-cancer and anti-microbial peptides but also found in important signaling proteins such as homeoproteins. Despite their potential practical applications, the mechanisms of CPP entry inside cells are ill-defined and even controversial. No genes had been described that regulate the intracellular delivery of CPPs. The current focus of our laboratory is to characterize the mechanism of CPP cell entry via direct translocation or via endocytosis and how they escape endosomes when they use this later entry route. We also investigate how physiological molecules that naturally bear cell-penetrating sequences, such as homeoproteins, enter cells.

We have identified potassium channels as key regulator of CPP translocation in cells. Using a CRISPR/Cas9-based screening, we discovered that various potassium channels positively modulate the direct cellular translocation of TAT-bound cargos by reducing the transmembrane potential of cells. Molecular dynamics simulations performed by our collaborators Gianvito Grasso and Andrea Danani at the Dalle Molle Institute for Artificial Intelligence in Ticino indicate that hyperpolarization favored the generation of ~2 nm-wide water pores used by CPPs to enter cells. Hyperpolarization is also required for optimal cellular uptake of CPPs other than TAT, including poly-arginine peptides, model amphipatic peptide, and penetratin. Pharmacological manipulation to lower the transmembrane potential can boost the cellular uptake of CPPs in zebrafish and mouse models. This work identifies for the first time genes that regulate CPP translocation and provides the scientific ground to pharmacological strategies augmenting the susceptibility of cells to capture CPP-linked cargos in vitro and in vivo. This work can be accessed through eLife.

Endocytosis is a major entry route used by cells to take up a variety of extracellular substances. The endocytosed material transits from early endosomes to late endosomes/lysosomes where they are degraded or recycled. Even though endocytosis can proceed in a variety of manners, the current evidence indicates that all endocytosed substances follow a single endocytic maturation pathway towards Lamp1-positive lysosomes that is characterized molecularly by the presence of Rab5 on early endosomes and Rab7 on late endosomes/lysosomes.

We are now providing evidence that there is a second endosomal pathway that had escaped detection so far. We have discovered this pathway by studying how cell-penetrating peptides (CPPs) are endocytosed. We have determined that progression along this endocytic pathway requires the Rab14 protein but not Rab5 and Rab7. We have also figured out that this endocytic route is taken by other, physiological, cationic cargos such as polyamines or homeodomains and that the LAMP1-positive compartment these cargos end in are not acidic, in contrast to what is seen in the classical endolysosomal pathway.

The discovery of a second endosomal pathway is unexpected as there was no previous indication of its existence, despite extensive analyses, starting in the 1950s, of various forms of endocytosis.

Our work brings an additional novelty. It shows that cationic cargos, such as CPPs, are internalized in a manner that also differs from known endocytosis modalities because inhibitors that block the formation of endosomes in the classical endolysosomal pathway have no effect on the formation of CPP-containing endosomes. Hence, not only are cationic cargos employing a newly discovered endocytic pathway to reach Lamp1-positive compartments, they are also seemingly taken up by cells in a unique manner.

The finding that polyamines and homeodomains use the Rab14-dependent endocytic pathway is also a key finding in our opinion as both are of fundamental importance in biology. Homeodomains are found within homeoproteins, master development regulators, which possess a CPP-like fragment within their sequence responsible for their cellular internalization. Homeoproteins bear significant therapeutic potential, in particular in the brain. Polyamines are small molecules involved in a multitude of cellular processes including gene regulation, cell proliferation, cell survival and cell death. How homeoproteins and polyamines are endocytosed had been unresolved until the present work. Our study may therefore open new avenues of research and may help understanding how these cargos of physiological and translational interest are endocytosed. This work can be accessed through Cell Reports.

The goal of the present project is to characterize this new form of endocytosis at the structural and mechanistic levels. A grant to the Swiss National Research Foundation has been submitted to support this research. This project is expected to provide important advances on two fronts. At the fundamental cell biology level, it will characterize a newly discovered endocytic pathway. At a preclinical level, it will give researchers working on the improvement of the bio-therapeutic delivering capacities of CPPs the mechanistic grounds to manipulate their entry into cells.

Homeoproteins (HPs) are a large class of transcription factors that play major roles in tissue patterning, axon guidance, cell migration during development, and neuroplasticity. The vast majority of HPs contain CPP sequences within their homeodomains (HDs) that allow them to penetrate cells. This entry may be modulated by the membrane lipid composition, interaction with glycosaminoglycan, the primary and secondary structures of the homeodomains (HDs), as well as temperature. Nevertheless, even though a number of studies have reported the ability of HPs to enter cells, how they do this mechanistically remains ill-defined. The presence of CPP-like sequences within the homeodomain (HD) of HP proteins suggests that HPs and CPPs may share a common mechanism of cellular entry. To investigate the hypothesis that HPs enter cells by direct translocation, we will determine whether membrane potential and water pore formation control HP entry into cells, similar to what we have shown for CPPs. To study the endocytic mode of HP entry into cells, we will build upon the knowledge acquired from our study on CPP endocytosis to determine if HP-containing endosomes employ a Rab5-independent endocytic route.