Neuroblastoma (NB) is a pediatric malignancy of the sympathetic nervous system, which is one of the deadliest solid tumors in childhood. It exhibits an extremely high heterogeneity, both genetically and biologically, which is reflected in the clinical outcome, ranging from spontaneous regression to an extremely aggressive and fatal disease. The Neuroblastoma Research group has a long-standing interest in the biology and genetics of NB, and more recently focused on the early events underpinning NB tumorigenesis, which remains poorly understood. NB is presumed to originate from abnormal differentiation of neural crest progenitor cells of the sympathoadrenal lineage. The anaplastic lymphoma kinase (ALK) and the transcription factor TWIST1 are developmental genes reactivated in various cancer settings through genetic alterations or deregulation. Currently, we are investigating the functional role of ALK deregulated activation and TWIST1 expression on NB tumor initiation and progression. We also participates in research projects of the European SIOPEN Biology group aiming to better integrate genomic, biologic and clinical data to best refine risk-stratification and treatment strategies to improve NB patient outcome. 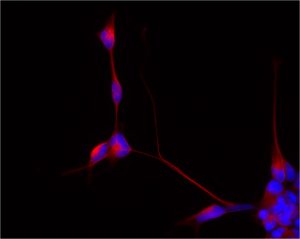 ALK represents the most frequently mutated gene in NB, and this corresponds to a predisposing event in NB. To improve our understanding of the initial event in NB tumorigenesis, we investigated the role played by ALK deregulated signaling in immortalized murine neural crest cell (NCC) lines. In vivo studies revealed that the expression of ALK-wt or the most frequent ALK-F1174L and ALK-R1275Q activating mutations in NCC lines were sufficient to induce the formation of highly undifferentiated tumors, but not to drive NB development. We demonstrated for the first time the oncogenic potential of the ALK-wt protein and revealed a possible role for ALK deregulated signaling in the control of NCC fate and differentiation potential (Montavon G, et al. Oncotarget. 2014 Jun 30;512:4452-66).

Next the impact of the ALK-F1174L activating mutation on the differentiation of the sympathetic nervous system was investigated using genetically engineered mouse models (Sox10-Cre and LSL-ALK-F1174L). This revealed that ALK-F1174L expression in migrating NC cells during embryonic development profoundly disturbs early sympathetic, neuronal and noradrenergic differentiation of sympathetic progenitors, in addition to increasing their proliferation, both mechanisms being potential crucial events in NB oncogenesis oncogenesis (Vivancos, L. et al. Front. Oncol. 2019 9:275).

Based on our recent findings, on a SNSF-funded project we aim to elucidate the precise involvement of ALK-mediated perturbations during NB initiation and progression. Our research strategy is to combine genetic and developmental biological approaches to clarify the expression level and the time-frame during which ALK deregulated signaling can affect SNS development and differentiation. We also aim to decipher the precise molecular mechanisms relying on ALK-mediated perturbations in the developing SNS. The results of our investigations will improve our comprehension of the early NB tumorigenesis mechanisms, particularly the relationship between SNS developmental aberrations and initiating events at the origin of NB.

Project #2: Deciphering the role of TWIST1 in neuroblastoma aggressive phenotype

The reactivation of the embryonic transcription factor TWIST1 is frequent in cancer and correlates with poor prognosis across many neoplasms. TWIST1 act as a multifunctional oncogene by promoting drug resistance, EMT, invasion, metastasis, and cancer stem cell properties. Although the role of TWIST1 has been extensively studied in various cancers, its implication in NB remains poorly understood.

To gain insight into the function of TWIST1 in NB, we generated TWIST1-knocked-out cells from primary and established NB cell lines through CRISPR/Cas9 technology. The impact of TWIST1 on in vivo tumor growth and metastatic dissemination is examined using orthotopic and subcutaneous xenografts in immunocompromised mice. To meticulously dissect at a molecular level the mechanisms and signaling cascades activated by TWIST1 contributing to the aggressive nature of NB, transcriptomic analyses of the resulting xenografts are performed together with in silico analyses of RNAseq data from primary NB tumors. The overall objective of this project is to improve our understanding on NB biology and to identify new key players of NB progression, which may serve as alternative drug targets. 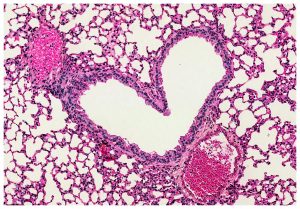