According to my old boss, Gerd Jürgens, “classic papers” are those that everybody cites and nobody reads (while “neo classics” would be those that everybody reads and nobody cites . . .). One of the main reason for this discrepancy between citation and reading of the classics (besides laziness and lack of time) is certainly the unfortunate tendency of our predecessors to write about science in their respective mother tongues, before the victory march of our new Latin – English. This prevents most scientists in the world from diving into the treasure chest of anatomical and physiological literature of the 19th and 20th century, written in German or French or Italian or Dutch . . . Not all of those authors were giants – although some certainly were, commanding an incredible power of observation and very sharp reasoning. I am fortunate enough to read German and French, which opens a big part of this treasure chest to me and I just wanted to share with you those papers that I found most inspiring to read: 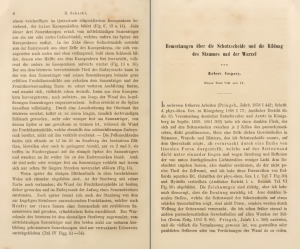 This is the work that gave rise to one of the few examples in plant biology in which a botanical structure was named after its discoverer. The reasons for this are unclear to me. Caspary himself referred to the Casparian strips simply as the walls or bands of the “protective sheath” (“Schutzscheide”), as he called the endodermis (this name, ironically, did not catch on). Kroemer (1903) already called the structure “Caspary’s strips”, while Rufz de Lavison (1910) calls them “suberised frames” – so there might have been some German-French conflict there . . . The work of Caspary is more difficult to read than the work of Kroemer. This is partially because of the nomenclature that is already much more modern in Kroemer’s work and easier to understand. Another reason, however, is that Caspary drives the complexity and length of German sentence structure to insane heights. There are several instance where sentences go over more than half a printed page. This, together with the strange insistence of Germans to put the verb right at the end of sentences, leads to awe-inspiring constructions. Here is an example of a rather short sentence, the only one in this entirely anatomical work in which Caspary speculates on the function of the endodermis (I attempt to keep the German syntax): “That such a greatly thickened, poreless cell layer that is joint together without extracellular spaces and which surrounds the body of the vascular bundle as a tube, is especially difficult to permeate for gases and liquids, can be assumed.” Original: “Dass eine so stark verdickte, porenlose, ohne Zwischenzellräume an einander schliessende Zellschicht, die den Gefässbündelkörper als Rohr umgiebt, in ganz besonderer Weise für Gase und Flüssigkeiten schwer durchdringlich oder ganz undurchdringlich ist, lässt sich vermuthen.”

As I understand Caspary’s work, it was mainly concerned with clearly defining the endodermis as a cell type in its own right, delineating it from other cell types. It was especially important for Caspary to distinguish the endodermis from the Cambium/pericycle as he insists several times that the endodermis is not a “lignified secondary growth ring” or a “lignified cambial sheet” (“verholzter Verdickungsring”), which was apparently assumed by some authors of the time. If I understood correctly, the origin of the different stem/root tissues from either apical or radial meristems was still a matter of debate and Caspary (rightly) insisted that the endodermis is formed from the apical meristem, before the formation of a cambium and that it also takes no part in forming the cambium later on.

Caspary, as Kroemer, is personal and confrontative, but what I like in Kroemer becomes a bit too much in Caspary’s work for our modern taste. Caspary is especially worked up about a colleague, cited as Sanio, which he repeatedly faults for his logic, his forgetfulness, his self-contradictions, exaggerated claims and generally wrong understanding of plant anatomy. I assume the colleague was Carl Gustav Sanio, which must have been quite a prolific botanist, since he named a lot of plant species and apparently has even a fern species named after him. Interestingly, Sanio also worked in Königsberg at the same time as Caspary. I don’t dare to imagine the working atmosphere at this place! 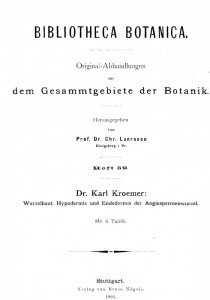 Published in Bibliotheca Botanica this “paper” is actually a whole book, published by Dr. Kroemer, who worked as an “Assistant” for Prof. Meyer in Marburg (interestingly, Prof. Meyer is not author on this work, so some Germans maybe weren’t all that hierarchical?). It’s a massive work that was probably many years in the making, covering the comparative anatomical development of all major dermal cell layers in angiosperm roots. The chapters on the endodermis start with a very good and critical review of what has been done in the 19th century since the discovery of Caspary. I love the way the work of colleagues is discussed by Kroemer (and generally by authors of this time). It is personal, opinionated, argumentative and confrontational, but it makes it so much clearer what the author believes himself and which claims of his colleagues he accepts and which one he refutes and why. It makes you wonder whether our way of writing hasn’t become too detached and polite at times.

The data on the endodermis is essentially a very careful description of the anatomical development of the endodermis, going back and forth between many different plant species – always attempting to use the comparison to either reveal general features or to use an extreme case to reveal something that would be otherwise not observable. The descriptions are based on careful use of histochemical stains whose specificities and limitations Kroemer discusses at great detail in the beginning. Based on these studies Kroemer concludes that: “3. dass der Streifen Reaktionen gibt, die man gewöhnlich als Holzreaktionen bezeichnet, dass dagegen eine Kutisierung des Streifens mit Sicherheit nicht nachzuweisen ist.” My translation: “3. that the strip displays (color) reactions that would be generally considered (color) reactions of wood, a suberisation of the strip, by contrast, cannot be demonstrated with any certainty.” This essentially means that Kroemer concluded that the “Casparian strip is made of lignin and not suberin”, 109 years before our paper on Arabidopsis (Naseer et al., PNAS, 2012). Sometimes science doesn’t move very fast . . .

Kroemer also did an amazing description and classification of the different stages of endodermal development, defining “embryonic”, “primary”, “secondary” and “tertiary” stages of endodermal development, which has been later used in variants by many other authors. If there is anything unsatisfying in this work than it is its complete absence of physiology. This wouldn’t be so bad, if there wasn’t a very long discussion at the end of the paper, trying to make a point about endodermal function from this purely anatomical description. Apparently, other people in the department of Prof. Meyer worked on physiological experiments. I am not aware whether this became ever published (but see the work of de Rufz de Lavison below, published 7 years later). 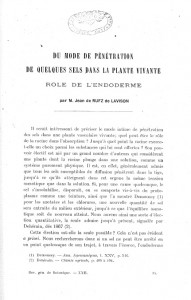 I don’t know how old the author was when he wrote this paper, but I also imagine him very young, because of his very direct, nearly blunt way of writing, his particular way of describing his methods and his way of citing. Rufz de Lavison extensively uses the first person, even more than usually done at that time. The author with his strange name of a French noble family doesn’t mention any title or position on the title page, but mentions at the end that the work was done at the Sorbonne, in the laboratory of Prof. Gaston Bonnier, who appears to have been an influential botanist at his time (see wiki entry). The author makes a short introduction in which he challenges the idea that plants lack the ability to select the nutrients that will be transported to the shoot. Here is how he formulates his question (my translation): “I wondered whether it would indeed be possible that a salt would penetrate a plant by following only the cellulose. Actually, I felt that the suberised frames of the endodermis would interrupt the continuity of the cellulose in the root.  . . .  I have tried to experimentally address this question for some salts.” Original: “Je me suis demandé s’il était possible qu’un sel pénétrât dans la plante, en suivant uniquement de la cellulose. Il me semblait, en effet, que les cadres subérisés de l’endoderme interrompaient la continuité de la cellulose dans la racine. … J’ai essayé de résoudre expérimantalement cette question pour quelques sels.”

The experiments he does are very simple: Using salts that can easily be detected, he treats plant roots with different salt solutions and looks whether there is no penetration into the cells themselves. If the salt isn’t taken up by the protoplast, he uses it (in his case iron sulfate) to visualize the block of uptake at the level of the endodermis. The important difference to earlier experiment was the awareness of Rufz de Lavison that the plants needed to stay alive during the treatment (he was an early live-imager!). His way of assessing whether he uses too much of a given salt was very simple indeed – he gently squeezed the roots; if they had become soft, they were discarded. Only conditions were the roots remained turgescent were considered as being instructive.