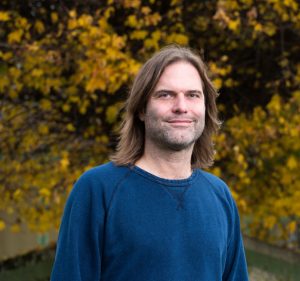 Niko Geldner studied biology at the Universities of Mainz, Bordeaux 2 and Tübingen. In Tübingen, he did his diploma thesis (1998) and PhD thesis (1998-2003) in the lab of Gerd Juergens, working on the role of GNOM in Arabidopsis embryogenesis and the polar localisation of the PIN1 auxin efflux carrier. He left Tübingen in 2004 to do a Postdoc as an EMBO and HFSP fellow at the Salk Insitute in La Jolla, California, in the lab of Joanne Chory. There, he worked on the endosomal trafficking of the plant steroid receptor kinase BRI1 and developed the WAVE set of sub-cellular compartment markers. In summer 2007, he started as an Assistant Professor at the University of Lausanne, where he was promoted to Associate Professor in 2012 and Full Professor in 2018. He was awarded starting and consolidator grants from the European Research Council (ERC) in 2007 and 2013. In 2021, he received an ERC Advanced grant to work on the elucidation of root-bacteria interaction at high spatial resolution. Niko Geldner is an EMBO member since 2017 and was elected AAAS Fellow in 2021. 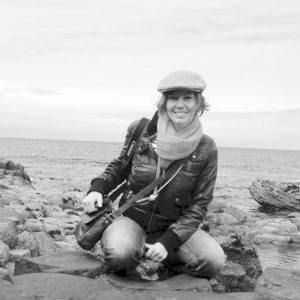 Valérie Dénervaud Tendon joined our lab in October 2007 and enjoyed shopping in order to set up the lab. She began her professional life in Nestlé Research Center where she obtained her professional diploma. She continue her studies at the Engineering School of Valais, in Sion, in the Food technology and Biotechnology department. She has been then working at University of Lausanne, in the lab of Prof. Dieter Haas lab, where her research was focused on the virulence of Pseudomonas aeruginosa and the role of the quorum sensing regulatory network. She also enjoyed Irish life style while working in University College of Cork, Ireland, in the lab of Fergal O’Gara. 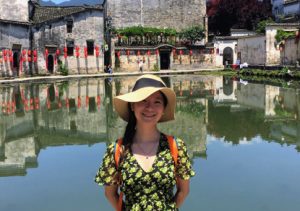 Yan is originally from Suzhou, China. Following her interest in plants from a young age, she moved to the UK in 2009 to study Plant Science at the University of Manchester, and later obtained a PhD on plant disease resistance genes. In the group of Prof. Jonathan Jones in The Sainsbury Laboratory (Norwich), she investigated how a resistance gene pair from Arabidopsis recognizes different bacterial pathogens in order to activate defense. Her PhD thesis (2016) and follow-up work unravel functional mechanisms of these resistance proteins at molecular level: from perception of pathogen molecules to the subsequent conformational changes that initiate defense signalling. Yan joined Niko’s group in July 2018, because she is fascinated by the ‘integrity surveillance’ signalling pathway in plant roots, which functions to establish a continuous water tight barrier (the Casparian Strip) rather than to monitor pathogen invasion. She was awarded a FEBS long-term fellowship to exploit this powerful system to uncover missing signalling modules and potential cross-talk with defense signalling. 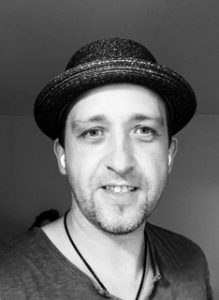 Robertas is from Lithuania. He studied Molecular Biology at the Vilnius University, Lithuania. He obtained his Masters and PhD at the University of Helsinki, Finland, in the group of Professor Yrjö Helariutta. During his PhD he studied vascular development in Arabidopsis thaliana and he was particularly interested in xylem specification, as well as in uncovering novel mechanisms of phloem sieve plate formation. After his PhD he continued his work, focusing particularly on phloem development and symplastic communication. Robertas joined the Geldner lab in August 2015 and he aims at uncovering the mechanism of Casparian strip remodelling during lateral root emergence. To achieve that, he will employ functional genomics, live-cell imaging and advanced electron microscopy. 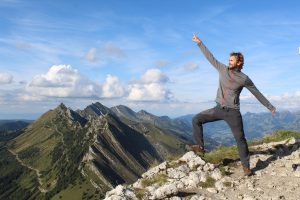 Anaxi is from Belgium, the country of beer, fries, waffles and chocolate (although Swiss people would argue with the latter). Having studied at the Université Libre de Bruxelles (ULB) in which he obtained his master’s degree in biotechnology and biochemistry, he moved to the medieval city of Ghent to carry out his PhD in plant biotechnology in the group of Prof. Eugenia Russinova at the Flemish Institute for Biotechnology (VIB). His research focused on understanding how signalling integration, specificity and regulation of GSK3-like kinases is achieved in plants using Arabidopsis thaliana as a model species. The findings presented in his thesis shed light on the molecular mechanisms driving asymmetric cell division and differentiation during leaf epidermal development. Anaxi specialized in life cell imaging, allowing him to study the dynamic process of cell division driven by protein phosphorylation and polarization. Passionate about the fundamental aspects of plant development, he joined the Geldner group as a post-doctoral fellow in September of 2019, aiming to further characterize the molecular network required to establish the selective barrier in the root endodermis called the Casparian Strip. In order to achieve this, he will rely on recently developed state of the art CRISPR activation technology combined with advanced live-cell imaging techniques. 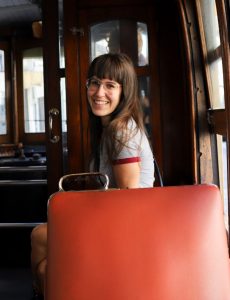 Born and raised in Spain, Irene studied biology at the Complutense University of Madrid (UCM) and got a double specialization in genetics and biotechnology. Then, she joined the group of Dr. César Llave of Stress and Gene Regulation in The Center of Biological Research (CIB) where she earned her Masters and PhD from the Polytechnic University of Madrid (UPM). During her PhD, she investigated the immune repressor BIR1 in Arabidopsis and discovered the contribution of this element of signaling to antiviral defense, its double genic regulation at a transcriptional and post-transcriptional level, and the biological relevance of this severe control. During these years, she also visited the lab of Prof. Andrzej Wierzbicki at the University of Michigan (UM) to learn about epigenetics and study its contribution to the regulation of BIR1 and other elements of defense signaling.
Driven by her curiosity and passion about how plants integrate stimuli and make decisions in a dynamic environment, Irene joined Niko´s team in May 2021 as a postdoctoral fellowship to elucidate signaling specificity and uncover key elements in the receptor network cross-talk within a cell. 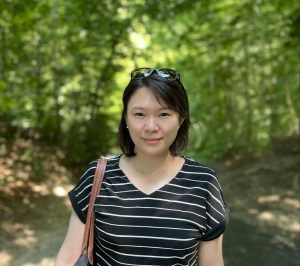 Huei-Hsuan, who goes by the name of Merissa, was born in Taiwan and raised on the tropical island of Bali, Indonesia. She obtained her bachelor’s degree in molecular biotechnology from the Chinese University of Hong Kong. Driven by her interest in plant science, she joined the group of Dr. Wolfgang Schmidt in the Institute of Plant and Microbial Biology, Academia Sinica, Taiwan to pursue her PhD. During her PhD, she investigated a pH-dependent iron deficiency response and elucidated the function of a novel enzyme in the extended phenylpropanoid pathway, referred to as scopoletin-8-hydroxylase, which participates in iron acquisition at elevated pH by mediating the synthesis of the coumarin fraxetin. Her work on root exudates further expanded her curiosity on the role of root exudates in plant-microbe interactions. Merissa joined Niko’s group in September 2021 as a postdoctoral researcher to study the basis of bacterial attraction to roots and investigate the missing link between Casparian strip integrity and rhizobacterial colonization. 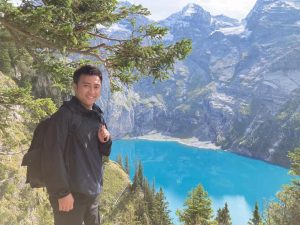 Jia Pang is from Sichuan, China. After obtaining a Bachelor of Bioengineering at Southwest Jiaotong University, he pursued the Master of Science in Shanghai Center for Plant Stress Biology (PSC/CEMPS). Under the supervision of Prof. Jian-Kang Zhu, he participated in the researches on the LEA protein family in Arabidopsis, application of the optimized CRISPR/Cas system and digging out novel molecular chaperone complex in regulating epigenetic silencing of methylated genomic regions. Then, with great interest in live-cell imaging and plant–microbiome interactions, Jia joined Niko’s lab for PhD studies in September 2021. He will mainly focus on the unique bacterial community attracted by roots and follow their action to uncover the story behind the dynamic colonization based on attraction. 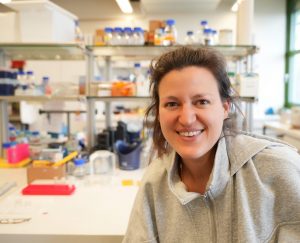 Ursina holds a MSc in Plant-Microbe Interactions and a BA in History of Modern Times of the University of Fribourg. Under co-supervision of Prof. Didier Reinhardt and Dr. Didier Schaefer she explored during her Master the functionality of the symbiosis relevant Vapyrin gene in the moss Physcomitrella patens. In the meantime, she discovered an ongoing fascination for live cell-imaging using confocal microscopy. As an intern in the Research Institute for Organic Agriculture (FiBL) she worked on field trials with seed and soil born pathogens. And in the national Research Institute for Snow, Forest and Landscape (WSL) she analysed historic data of drought damage in Swiss forests since 1856. Recently, she worked as a research assistant in the research group of Dr. Ora Hazak on establishing stable tissue culture transformation of tomato. Now, as a PhD candidate in a joint project with the research group of Dr. Christoph Keel at DMF and Prof. Harm-Anton Klok at EPFL she will be working on visualising bacterial chemotaxis towards plant roots. The aim of the project is to explore the potential of using plant-beneficial bacteria as vectors for the active delivery of biodegradable nano bodies directly to roots. 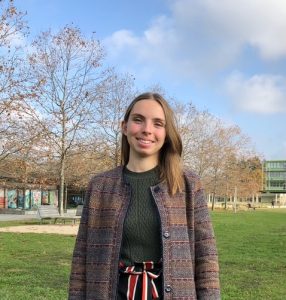 Jade comes from France, she got her bachelor in biology at the University of Lausanne in 2020. She then started a Master in Molecular life science at the University of Lausanne, during which she carried out a small project in the group of Niko Geldner, focused on the characterization of different CRISPR/Cas9 based systems aiming to specifically activate genes in the endodermis. During her master, she also performed a one-year project in the group of Jolanda van Leeuwen, where she investigated the mechanisms of genetic suppression of the essential gene RIB3 in the budding yeast Saccharomyces cerevisiae. With her degree in hand, she came back to the Geldner lab in March 2022 to start her PhD. She will be interested in the role of the putative protease LOTR1 in Casparian strip formation. 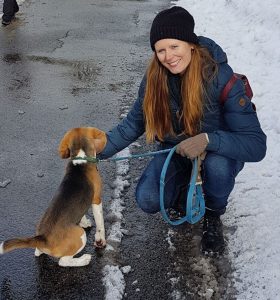 Isabelle is from Switzerland and got her professional diploma at the CMU in Geneva, at the mophology department. She got her first job in a pharmaceutical company, focusing on the development of novel small molecules for neurologic disorders. Then, after a fun sabbatical year travelling and woofing in Australia and New Zealand, she got a position at EPFL, in Pierre Gönczy’s lab for 8 years. There she worked on C.elegans and human cells, helping to understand cell division mechanisms and centriole formation. After another year travelling around the world as a backpacker, Isabelle joined Niko’s lab in June 2019 and enjoys working in plant science. 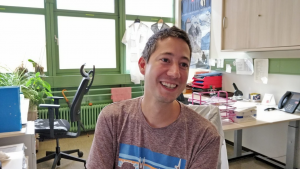 Damien received his master’s degree in biology from the University of Lausanne, Switzerland, in 2014. He then joined the Group of Niko Geldner in 2015 as an electron microscopy specialist. He currently splits his time working for the Geldner’s lab and for the Electron Microscopy Facility (EMF). For the group, Damien is involved in all the projects requiring EM, from sample preparation to image acquisition and data interpretation. He’s enjoying his time helping the other members of the lab in the understanding of their mutants by visualizing the Casparian strip and all the defects visible at the ultra structural level. 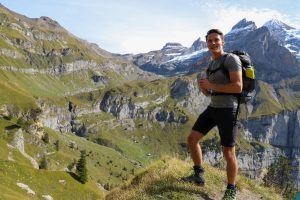 Born and raised in Lausanne (Switzerland), Etienne first worked as electrician before its curiosity to better understand the world surrounding him increased so much that he decided to go back to study. He obtained its Bachelor at University of Lausanne. For his first-step master project, he worked on the ability of insect eggs to trigger systemic acquired resistance against the fungal pathogen Botrytis cinerea in Philippe Reymond’s group. He joined then the Geldner group for his long-term master project, where he focused on determining whether additional members of the CASP protein family could be involved in the Casparian Strip formation. After a small break in Johan Auwerx’s group at EPFL, he realized the unconditional love he had for our group and decided to start his PhD. The PhD will have for main objective to better characterize the molecular mechanisms underlying the deposition of suberin around endodermal cells.