The article “Sollte dies mein Geschreibsel meine theure Heymath erreichen”: Linguistic variation in the diary of a nineteenth-century Swiss German migrant” by Ladina Knüsli (UNIL) was published in the Journal of Historical Sociolinguistics 5/2 (2019; special issue on Historical heritage language ego-documents: From home, from away, and from below, edited by Joshua R. Brown, University of Wisconsin – Eau Claire)!

Increasing migration from the nineteenth century onwards has led to the production of letters and travel diaries that allowed migrants to stay in touch with their home country. Taking the perspective of ‘language history from below’, this paper focuses on a Swiss variety of written German, as used in the diary of Matthias Dürst, and its status in relation to the standardization of written German, the local dialect, and the new majority language English. The study is couched in pre-immigration socio-economic and educational history. The paper systematically analyzes orthographic and morphosyntactic variation, as well as lexical use that are compared to the findings of Elspaß’s (2005. Sprachgeschichte von unten: Untersuchungen zum geschriebenen Alltagsdeutsch im 19. Jahrhundert. Tübingen: Niemeyer) study on German migrant letters. As the results show, the text contains some influences of dialect, especially concerning diminutives and the lexicon. Moreover, the findings reveal a gradual exposure to English as the new majority language, thus settling within the focus of this special issue on Germanic languages in contact with English. The study of the diary proves once again how valuable ego-documents, and also heritage language ego-documents, are for the field of historical sociolinguistics. 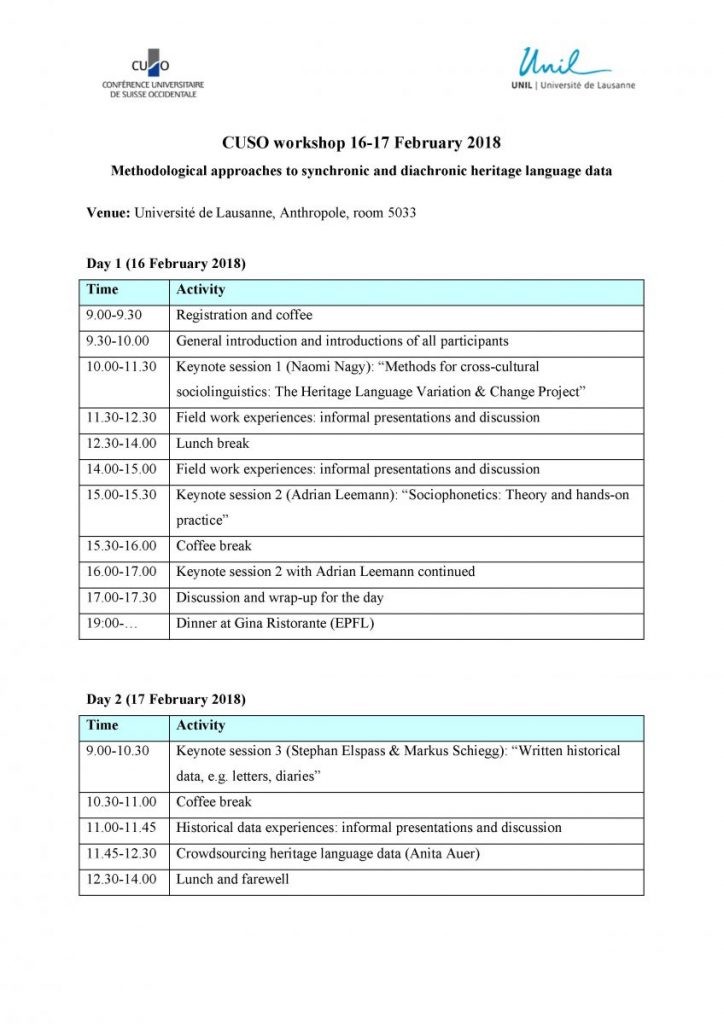 Research findings by Guido Seiler and Mark Louden were presented in a Swissinfo article entitled ‘I recognise every word, but I have no idea what you’re saying’, which was published on 1 November 2017.

You can listen to the radio programme here: https://www.srf.ch/sendungen/kontext/auswandererdialekte-spuren-der-migration

Anita Auer and Alexandra Derungs have presented their recent research findings on “Preserving Swiss Dialect features in the diaspora: The case of New Glarus” at the Eighth Annual Workshop on Immigrant Languages in the Americas (WILA 8), which took place at the University of Copenhagen from 12-14 October 2017.

Guido Seiler presented findings of his research on the language island of the “Shwitzer” at the 19. Arbeitstagung zur alemannischen Dialektologie, which took place at the University of Freiburg/Breisgau from 11-13 October 2017. The abstract of Guido’s talk can be downloaded here: http://paul.igl.uni-freiburg.de/alemtag2017/?Programm

The abstract of the talk that Guido Seiler gave at the SLE 2017 can be found here: http://sle2017.eu/downloads/BOOK%20OF%20ABSTRACTS%20final.pdf

You can listen to the radio programme here: https://www.srf.ch/sendungen/schnabelweid/er-het-e-pfiife-gsmoukt

Anita Auer is giving a plenary talk on “Preserving Swiss Dialects in the Diaspora: The Social Life of a Wisconsin Language Island” on 7 April 2017 from 6:45 – 8:00 at New York University. The talk, which is free and open to the public, will be given as part of the HiSoN 2017 Conference.

Abstract of the talk:

When many people from different nations left Europe for North America during the so-called “Age of Mass Migration” (1850-1920s), a great number of Swiss also left their homeland in search of betterment in North America. A Swiss settlement of particular interest is New Glarus, Wisconsin as (a) it started as a colony (which is atypical for Switzerland), and (b) the town has retained its Swiss identity – being known as America’s Little Switzerland – until today. Usually, historical sociolinguists can only rely on surviving letters and diaries by migrants in order to get a partial insight into their language use, the maintenance of the homeland variety, and the possible shift to the new language. In the case of New Glarus, however, recordings from the 1960s of heritage speakers born as early as the late 1900s (now held in the Max Kade Institute for German-American Studies) allow us to better trace the development of a Swiss heritage dialect, as well as processes such as dialect leveling, attrition, and gradual language shift in the diaspora. In this paper, I will thus shed light on the development of a Swiss German dialect in the diaspora through a linguistic study of early and more recent recordings, historical documents, and the cultural memory of “Neuglarner” today.