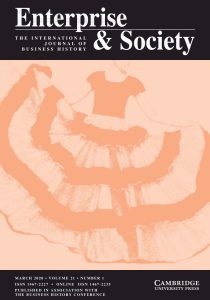 The recent arrival of women on corporate boards has been extensively discussed in the literature. However, most of the studies focus on very recent times. This article analyzes the presence of women on the corporate boards of the largest firms in Switzerland across the past hundred years. It shows that until the beginning of the 1970s, the very few women sitting on the boardrooms belonged to the families owning the firms. Two main factors contributed then to the progressive opening of the corporate elites to women. First, the extending in 1971 of “universal suffrage” to women led to a feminization of the political elites, and women with a political profile entered the boardrooms of firms in the distribution and retailing sector. Second, the increasing globalization of the economy at the end of the twentieth century contributed to weaken the cohesion of the very male and Swiss corporate elite. At the beginning of the twenty-first century, however, the presence of women remained low in international comparison, and they were still hitting the “glass ceiling” regarding the top positions in the firm.