Situated at the centre of our brain, the hippocampus shelters a neuron nursery. (© ktsimages / iStockphotos)

Nicolas Toni is Assistant Professor at the Department of Fundamental Neurosciences in the Faculty of Biology and Medicine at UNIL.
Elisabeth Gordon / Allez savoir!

Even in adult brains, new neurons are continually forming. Over our lifetime, we renew 80% of the cells in the area of the hippocampus, a crucial structure for learning and memory. A team at UNIL has uncovered some of the secrets of this process of neurogenesis, with the added bonus of potential therapeutic applications, notably for Alzheimer’s disease.

Twenty years ago it seemed that the matter was settled. Contrary to numerous other cells in our body, those found in the brain could not re-grow. During development of the embryo and then during childhood, our neurons form and connect to produce a highly complex network. Yet when we reach adulthood, a certain number of them degenerate and die: a net loss for our motor and cognitive functions. At least that was the accepted theory in neuroscience circles. Nowadays we know that this is simply not the case and that, at any age – or almost – neurons can regenerate in certain parts of the brain, which are veritable neuron nurseries.

Everything began to shift in the mid-1960s when American researchers observed that new neurons were being generated in the brains of adult rats. But these results raised numerous doubts among the researchers, as ‘they went against established dogma’, according to Nicolas Toni, Assistant Professor at the Department of Fundamental Neurosciences in the Faculty of Biology and Medicine at UNIL. In the mid-1990s, neuroscientists once again examined this subject and noted that ‘certain areas of the brain contain stem cells capable of continuously generating a relatively large number of neurons and other brain cells.’ This time there was no room for any doubt, particularly as, shortly afterwards, this process was also observed in human brains.

The fantasy of a fountain of youth

In general, stem cells are referred to as ‘undifferentiated’ cells. They are not yet of a specialised cell type and are capable of developing into different types of cells. At the embryonic stage, they are the basis for the development of the future child’s organs and tissues. They are also present in adults, in skin for example, where they ensure wound healing. Those that are found in the brain can not only generate nerve cells ‘but can also self-replicate’, divide to create two new daughter stem cells which, in turn, will generate other nerve cells, giving rise to the ‘fantasy of a fountain of youth’, notes Nicolas Toni with amusement.

Stem cells are found in two particular regions of the brain. Firstly, in the subventricular zone situated at the centre of the brain. They populate the dentate gyrus of the hippocampus. ‘It is a very small area. In the human being, the hippocampus is the size of a little finger and the dentate gyrus represents around a quarter of that,’ specifies Nicolas Toni. This space is no less important, as ‘it represents the gateway to information in the hippocampus’. The latter plays a key role in learning and memory. ‘It is indispensable to human beings. A person deprived of it can no longer learn new information and lives continuously in the past.’ 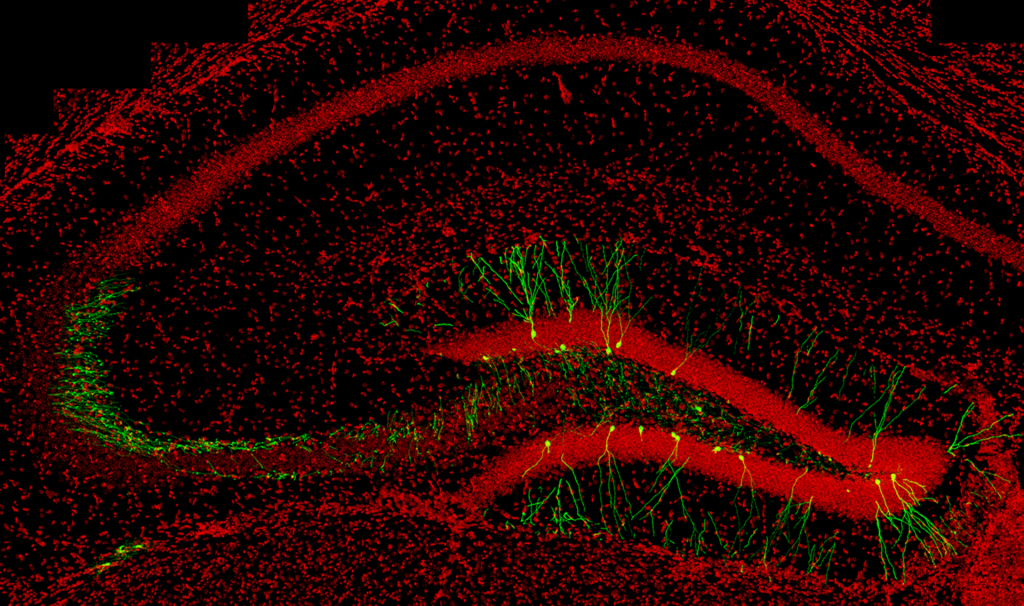 This photo, taken using a fluorescence microscope, shows a cross-section of the hippocampus in an adult mouse. Bottom right can be seen the dentate gyrus (in the form of an arrowhead). The cell bodies are marked in red and the newly formed neurons in green. The latter have half the number of synapses when the astrocytes (invisible on the image) are deactivated. This is proof that astrocytes influence neurogenesis. (© Department of Fundamental Neurosciences, UNIL)

A double revolution – conceptual and functional

The discovery of the existence of stem cells in the hippocampus represents a ‘double revolution’, according to the neuroscientist. ‘It implies that an adult brain can still generate neurons. Moreover, from the point of view of brain functioning, it is also highly intriguing.’ Recent studies have indeed shown that a human being generates around 1500 new neurons per day in the dentate gyrus of the hippocampus. This is small in number compared to the 100 billion neurons in the brain. But over a lifetime, this represents a renewal of around 80% of the neuronal population of the dentate gyrus. ‘How’, wonders the UNIL researcher ‘do we explain that a structure which is so important for memory renews itself to such an extent?’

From stem cell to neuron

A stem cell must at all events accomplish several stages before forming a new neuron capable of fulfilling its functions. It firstly divides and its offspring must then migrate to the place in the brain where they are supposed to establish themselves. These daughter cells subsequently differentiate themselves and, like caterpillars that become butterflies, transform themselves into ‘real’ neurons. These now have to survive, as ‘many of them die,’ points out the neuroscientist. ‘Of 100 cells that are formed at any given moment only twenty of them are still living a month later.’

And even then the process is not over. The tender young neuron has to mature to acquire its final structure. To achieve this, its cell body, which contains its nucleus, must acquire tree-like structures – the dendrites – and filaments – the axons. It must also form synapses which enable it to connect to other partners and thus to ‘plug itself into the circuit’. These stages are all independent from each other, which uniquely complicates the task of trying to influence the process. ‘On the one hand some molecules increase the proliferation of stem cells but on the other they encourage neuronal death.’ Overall, they do not help create new nerve cells.

By studying mice, the UNIL team is trying to understand the mechanisms that regulate the different phases of neurogenesis. In a recent study, researchers scrutinised the final stage in particular, when the new neuron is integrated into the existing network, something that is crucial on more than one count. If the newly arrived neuron does not plug into the rest of the circuit, it is like an unconnected electric wire and serves no purpose. Moreover, in such a case, as Nicolas Toni discovered when working at the Salk Institute in California, it is quite simply eliminated. Curiously, in addition, the first synapses formed by immature neurons are incapable of receiving information from their partners and thus transmitting it any further. They are referred to as silent synapses.

Competition between young and old neurons

To explain this phenomenon, Nicolas Toni put forward the hypothesis, since confirmed by other teams, that ‘the new neurons are selected on a competitive basis, a sort of Darwinism at cellular level.’ Using an electronic microscope, the researcher and his colleagues have indeed observed that the young neuron does not integrate just anywhere or anyhow within the network. ‘The neuron’s dendrite forms synapses with axons already in the process of communicating with older neurons.’ For a while, the young and old neurons co-exist, but when the synapse of the former has matured sufficiently it eliminates its older counterpart. There is therefore a sort of struggle going on between the neurons and it is the better one that wins and survives, in line with the celebrated British naturalist’s theory of evolution.

This phenomenon sheds new light on how learning and memory function. ‘The storage of information and how it is memorised occurs by reinforcement of the connections between neurons and elimination of a certain number of others,’ the neuroscientist points out. The development of new neurons, and thus of new synapses, consolidates this process. Naturally, it disrupts the organisation of the existing circuit, but it is precisely this instability in the network ‘which offers the possibility of forming new connections in the dentate gyrus and thus new memories.’ Furthermore, numerous studies show that inhibiting adult neurogenesis disrupts the processes of memory.

As Nicolas Toni has observed, a young neuron does not survive if it does not succeed in creating new synapses. The researcher asked himself whether any mechanisms existed that could help establish this vital area and, if so, whether they were the same in adults and in embryos. In response to this question, UNIL researchers, in collaboration with their colleagues at the Universities of Basle and Strasbourg, looked at another type of brain cell, the astrocyte, ‘which plays a part in the functioning of neurons and whose role is still little known.’

Cells which manage their territory…

The Lausanne neuroscientists used a genetic tool that was particularly clever, as it did not kill the astrocytes but blocked their action. As a result, these nerve cells could no longer release the various molecules they normally emit into the surrounding space. Thus, ‘they could no longer communicate with the outside world; they became dumb.’ The researchers then noted that a neuron whose dendrites crossed a zone where the silent astrocytes were to be found ‘formed half the number of synapses than when it developed in the territory of a normal astrocyte.’ Moreover, ‘if we rendered the astrocytes dumb, we saw a marked increase in the deaths of immature neurons.’

…and influence the competition

This proves – and it is a first according to the neuroscientist – that the number of synapses that a new neuron can create ‘depends on the environment in which it is located’, and depends notably on the astrocytes. The latter can influence competition between young and old neurons ‘by increasing, via the molecules that they release, the competitiveness of the former.’ The UNIL group has, in addition, identified one of these molecules – D-serine – which operates on neurons and whose effects on depression and memory are currently being tested in humans.

This research is arousing considerable hopes. It indicates that it may be possible to envisage stimulating the formation of new neurons in the hippocampus for therapeutic purposes. This cerebral structure, which is responsible for learning and memory, also plays a role in anxiety and depression. By accelerating the renewal of its neurons, it may be possible to attenuate the symptoms of these disorders or to slow down memory loss linked to Alzheimer’s disease. The experiment, in which the UNIL team took part, has already been carried out in mice in which this degenerative disease was reproduced, and it has proved conclusive. As Nicolas Toni points out, having ‘boosted’ the production of new neurons in the brains of these rodents, French researchers observed ‘an increase in their learning and spatial memory performances.’ In this he sees ‘proof that the concept is valid.’ The gulf between mice and humans is of course wide, but there is nothing to stop us from dreaming. 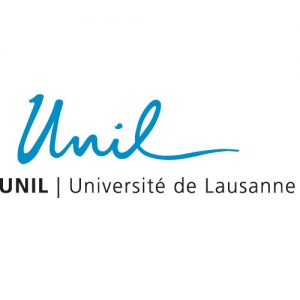